Battle Report 23, i5 Team Tournament Round 3, Wurmwood vs. Sturm and Drang

Round 3 arrived, and most of my team had eaten a lot of lunch.

That being said, morale had improved. The other team captain decided to pick the tables rather than most of the matchups, and I felt like I had been able to secure most of my team good games.

The other team captain was my opponent, and he chose the table I had wanted most for myself with a beautifully terrain dense zone on one side for Wurmwood to hang out in.

And I windmill slammed Wurmwood since his other list was Carver and I feel Wurmwood is fine into both.

I won the roll off and elected to go second on Outlast. 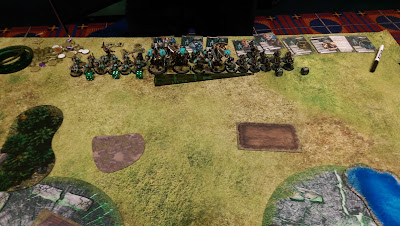 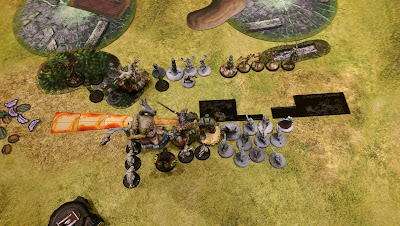 I had a really, really clear plan of attack here. Turn 1, I Hellmouth as many Brigands off the table as I can on the right side while getting Wurmwood into the forest to give him stealth on the left. Beasts would go pretty central to outthreat his beasts, and if he feats before I do, I counterfeat and ride it out. I'm pretty confidant I can get 3 points on my second turn unless he commits his beasts to die, and I'm fine with that too.

Brigands run up on either side, Beasts make a wall centrally for Sturm to hide behind. Deceleration goes up, which I'd forgotten about and makes the Hellmouth I have planned less good. 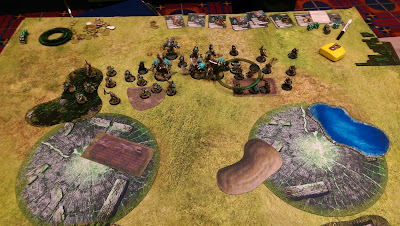 I measure the distance from Cassius to the middle Brigand not in the trench on my right side. It's just under 19 inches, so he goes first and runs up the field.

Wurmwood activates next, Hellmouth's that one and kills 3, knocking down two more due to tough. He then casts Dark Path and gets Cassius safe.

Bone Grinders murder each-other. Sentry Stones get a Mannikin killed from each, and they kill the remaining KD'd Brigands on the right.

Everything else advances up. He's put prey on one unit of Shifting Stones and one unit of Sentry Stones, so I play pretty aggressive with my beasts (although keeping them safe from TK plus charge on his hogs). 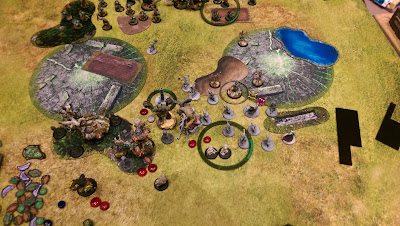 As expected, he doesn't want to contest with his beasts, and just puts Brigands in the zones, killing some Mannikins and Shamblers. 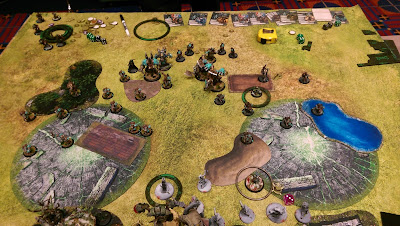 Between sprays, Strangleholds, and Hellmouth, I am able to completely clear the left zone, while the Shamblers clear the right zone. Wurmwood hops up behind the house and pops his feat. 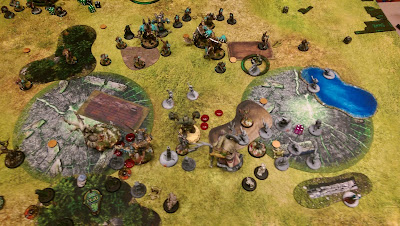 He moves up and feats, contesting the left zone with a Road Hog, but keeping his War Hogs central. 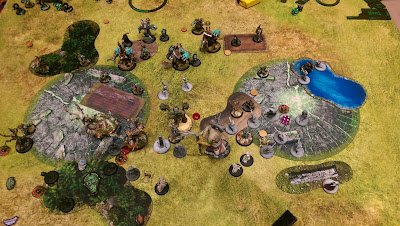 I just need to kill 3 Brigands, and I am able to do so with Shamblers and Sentry Stones.

Cassius runs to the right zone, and Wurmwood casts Dark Path to go over and dominate that zone for 2 more, getting me to 5.

I forgot to take a picture of this turn, sorry :/


Victory for the Druids!

Turns out I'd been very successful in lining up good matches for my teammates too, as we all won our games leaving our overall record at 9-6 and in contention for second place.
Posted by Jaden Wind at 4:59 PM