Battle Report 21, i5 Team Tournament Round 1: Wurmwood vs. Tristan Durant

This was the first 5-man team event I had ever participated in, and somehow I was nominated to be Captain.

This was a much more stressful job than I had anticipated as we had a player drop out, then a second one drop out. Then our alternates list was illegal and both of them weren't optimized because I hadn't had time to go over them before submitting since he was our alternate. Then one of the guys could come again.

Then a huge storm hit the western coast of the United States and the car ride turned into a nightmare of standing water on the roads and pouring rain.

Adding to that, one of our guys had only played one of his lists, and that only thrice, one of our guys had played 3 total games of mark 3...with a different faction and system, our alts lists were not tuned, and we were in for what could have easily been a horribly stressful nasty event.

Fortunately, all of my teammates are extremely resilient guys and we had a blast. I'm not going to talk about my list selection process etc. because, to be honest, it was laughable.

I was playing the same lists I've been playing for 2 months:

My opponent had Kreoss 1 pop and drop paired with a Durant heavy list. I knew he couldn't play pop and drop because Wurmwood really messes with that even on a good day, and this table was very terrain heavy (as were all of them, kudos to the TO's for good terrain!).

My opponent opted to go second, taking the side with the wall. 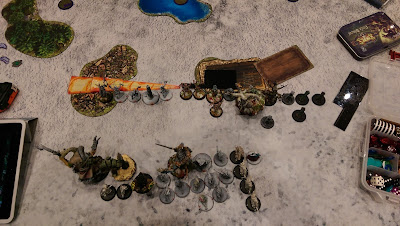 That's a lot of jacks, and I wasn't planning on getting to use Stranglehold much this game (I didn't get to), so I needed to use the big puddle in the center of the table to take advantage of his total lack of pathfinder.

I also planned to take over the weak side of the table (the one without the Bastions) and start scoring points ASAP. Him going second was annoying though. 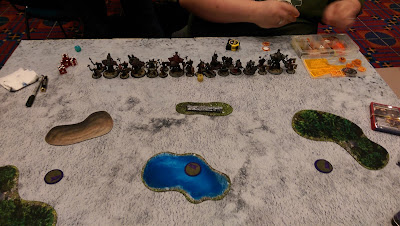 Hey guess what?! Stuff ran. That was basically the extent of it. Wurmwood put up Wild Growth to connect the big forest on the right and make it hard for his Reckoner over there to do anything important. My two living heavies chilled out in the rubble for cover, and my Bone Grinders slaughtered each-other to fuel the tree. They had a really hard time though, so the Gorax and Lanyssa had to lend a hand. 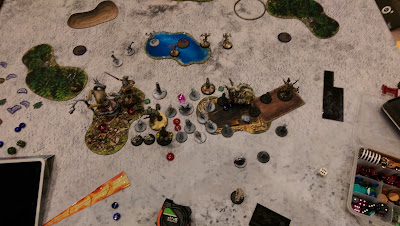 Passage went up on allll the jacks and everything ran. Inviolable Resolve went on the Templar. 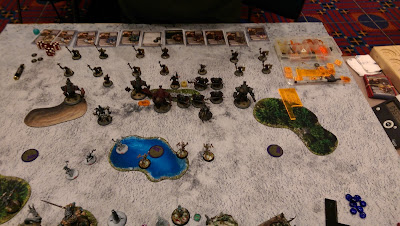 Well I saw an opportunity to mess some stuff up and decided to go for it.

Cassius ran. I believe Wurmwood activated next and put Curse of Shadows on his Bastions, and then cast Dark Path to get Cassius safe. He also cast Wild Growth.

My Mannikins then devoted their turn to spraying three Bastions off the table. Man the 5 health thing on them is rough. The Stones each made a forest, but unfortunately that meant that the grey Mannikins had charged out of command and did nothing that turn.

Megalith trampled up and cast Undergrowth so that I wouldn't have to put Primal on the Stalker to reliably hit the Dervish.

The Stalker charged the Dervish, murdered it, and cast Lightning Strike to get farther than 9 inches from his Templar and 8 from his Crusader.

Everything else moved up. 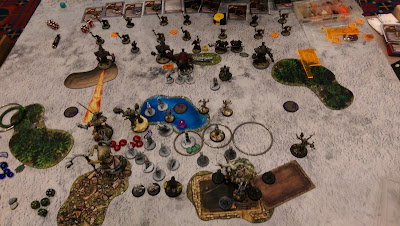 I'd left him a great opportunity to score on the right flag, as only one model was contesting and his Reckoner could easily shoot it off the table.

He des so, and his Devout gets unjammed by the Bastions before running over to the flag.

All of his jacks get Passage sung on them, and things mostly stay where they are. His heavies advance to contest the two flags. 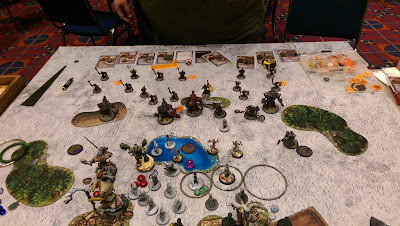 Well I don't like being down on Scenario already, especially since that's my weak board edge.

I upkeep Curse of Shadows.

I have a brilliant plan to charge the middle Reckoner with my Bokur and scrap it.

Mannikins activate first and spray the other two Bastions off the table.

The Bokur unit activates and charges. I miss four attacks needing sixes, so the Reckoner survives on 6 boxes.

Megalith moves up and chucks the Templar. Now, I should have chucked him directly away, but I didn't, opting to KD both him and the Reckoner. BAD MOVE. If he'd been way back, I wouldn't have lost Megalith next turn thanks to Wurmwood's feat.

I take a risk with the Stalker and don't Primal him to go in on the Crusader. At dice -1 and the ability to walk into melee, I get 5 attacks doing 30 and one attack at dice -3 doing another 4. Averages say I kill him.

I roll average and kill him. I'm contesting the right flag, so Wurmwood activates, chucks some Strangleholds at choir guys, and FEATS!.

I get a point! 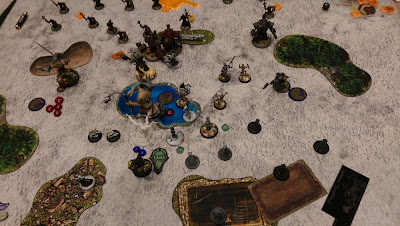 My not throwing his Templar directly away is super bad for me here. Durant activates and Feats, casting Manifest Destiny.

His Templar murders Megalith, like MURDERS Megalith. I haven't seen damage dice that hot in a while. His choir dudes jam the Stalker and contest on the left, not too worried there. His middle Reckoner blows up the Bokur.

His Reckoner is out of range to walk into Cassius, so tries to shoot him and fails.

His Devout moves over and kills him.

No points are scored.

Well I need to murder that Templar, and since it got Battle put on it last turn, I think that's very doable. Time for my super secret Brennos tech!

The Stalker murders his Choir dudes and Sprints back to the flag. The Gorax casts Primal on Brennos.

Wurmwood activates, getting Curse of Shadows onto the Templar and putting down a forest.

One unit of Mannikins activates and charges the Reckoner, rolling atrociously and leaving him on one.

Brennos moves up and takes down the Templar thanks to Blessed on his Staff! :D Super Secret Brennos tech FTW!.

He uses his horns on the Reckoner and....fails to do any damage. Uh oh.

I spend every single last attack I have on killing that Reckoner before it dies on the last one. I just needed a boosted 9 once, and it took 5 attacks to get there.

Gobbers Cloud up in case he wants to try and charge my Stalker.

I get two more points. 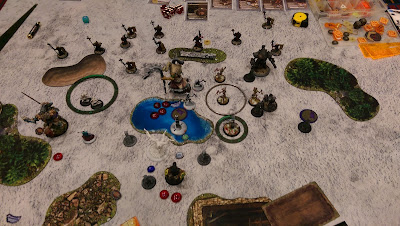 He jams me with Choir members and puts Battle on the remaining Reckoner, who charges in and kills Brennos handily. He's not able to contest with either of his jacks though, and that is critical.

No more points are scored, and he's only contesting with a handful of choir members and such. 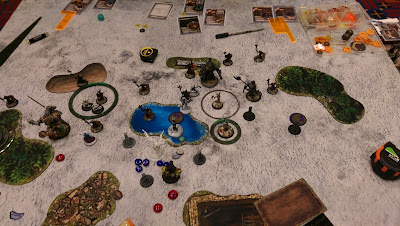 Mannikins activates and spray dudes to death. After both units have activated, he has 2 choir members left on the left flag.

The Gorax murders the one in front of Lanyssa after getting placed by the Shifting Stones, and the Stalker moves over, killing the one remaining guy before Sprinting back to his flag to net me my fifth point. 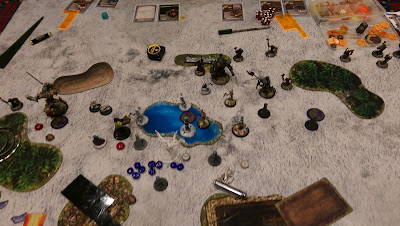 Score 5-1
Victory for the Druids!

I thought the match-up was pretty solidly in my favor, and I'd somehow managed to arrange good tables and match-ups for the rest of my team. We went 4-1, winning that round with 18 control points I believe.