Battle Report 22, i5 Team Tournament Round 2, Tanith vs. Vyros 2

Round 2 my team got paired against a team that had spent something like 100 hours on matchup theorizing.

Needless to say, I got crushed on the matchup selection, and the one good matchup I actually got for us got diced.

I got Vyros 2, which I believe is a terrible matchup for both of my lists. That being said, Star-Crossed is a really good effect against his list since if he can't get Synergy up, he's not hitting most of my models.

The Scenario was Recon, and my opponent was playing:


I won the roll off and decided to go second, which in hindsight is really where I lost the game. I 100% should have gone first in this matchup since none of the terrain actually mattered to either of our lists and getting up the field should have been my priority. 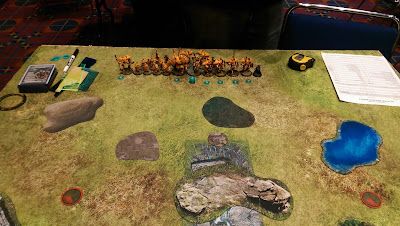 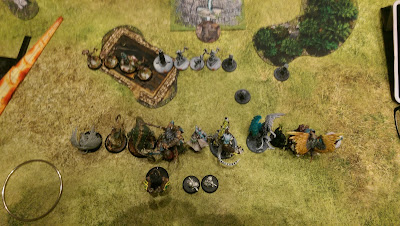 He ran a me, and I realized how bad of an idea going Second had been instantly. I had no room to maneuver, and no where to hide against his whole battlegroup having Birds Eye.

Synergy and Deceleration both went up. 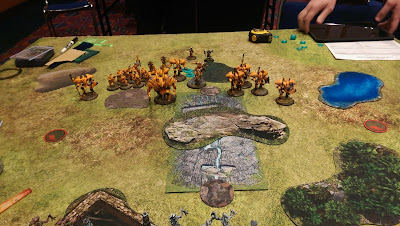 I thought I could bait him into giving me Imperatus and a Griffon, so I positioned everything so that he could get at Snapjaw with Imperatus if he put a lot of other models up first.

Unfortunately, I also screwed up and put one of my Scarsfells right next to Snapjaw, so he had plenty to go after. 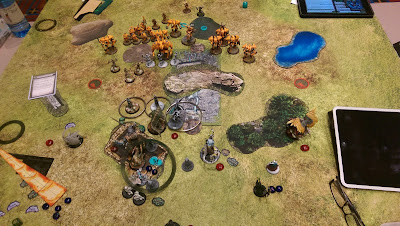 Stuff kills stuff, Synergy gets to 3 and Imperatus gets the bonus damage from an Arcanist.

He does charge in and kill Snapjaw and a Scarsfell, but he's given me a chance to even out the attrition fight nicely. 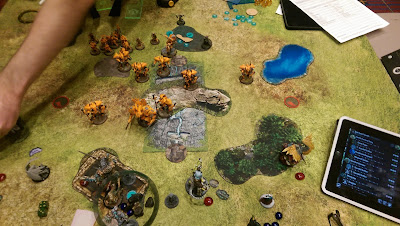 Tanith shoots Imperatus and puts Primal on the Stalker. I still can't believe I did that.

Anyway, Primal on the Stalker, he goes in at Imperatus, triggers Phoenix Protocol easily with Scything Touch and warping Strength, whacks the Griffon a bit too.

Grey Scarsfell charges in and finishes off Imperatus, a spray from the Pureblood kills the Griffon.

The Yellow Griffon goes into the far right Aspis and does about half its health.

Star Crossed is up. 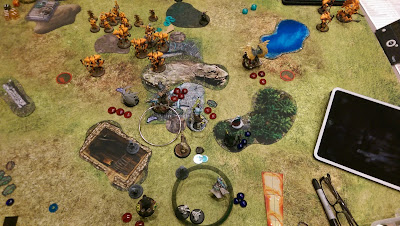 He goes into the Stalker with a few things, I believe missing his only two attacks of the game here.

I trigger Admonition on the Pureblood to threaten Vyros, and he puts his other lights between the two of them.

Side bar - I was a total moron in a number of ways this game, but this one really takes the cake. I put the Pureblood a millimeter closer to the Stalker than his Griffon was, so the Stalker would frenzy into the Pureblood next turn rather than into the Griffon. Yeah. Bad times were had.

He uses his far right jack to one round my Scarsfell. 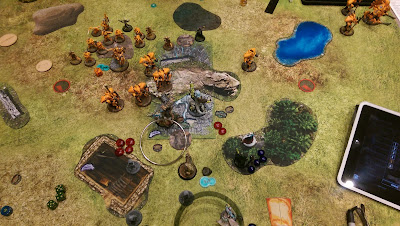 Stalker frenzies, actually hitting the Pureblood with his Mind out, and doing a couple of damage.

I kill a couple of lights with a Primaled, Scything Touch Pureblood, and put Admonition on the Stalker as well.

Despite my opponent going deep into the tank, I know the game is effectively over. 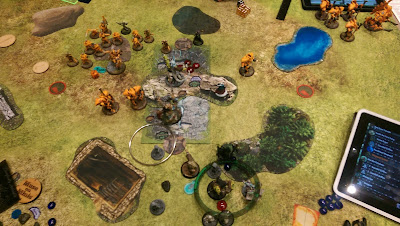 The Invictors do a massive CRA into the Stalker, miss, and then re-roll cuz they're awesome and hit, polishing him off.

Both my Objective and Wrong Eye die, and Vyros charges into my Pureblood, killing it. 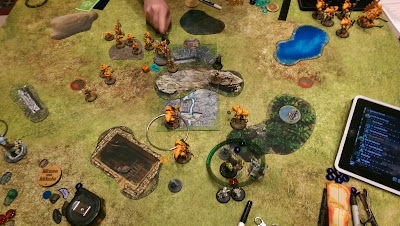 I chuck his lights into eachother with the Gorax, and try for the REALLY long shot assassination with Tanith since Vyros is camping nothing. The dice don't smile on me (needed 2 boosted 15s in a row sooo) and I concede.

Sadly, a Loss for the Druids

This is both a freaking awful matchup for Circle, and yet not as bad as I thought it would be. Really, my own stupidity lost me this game. Three glaring mistakes - not going first, putting Primal on the Stalker, and moving the Pureblood too close to him all prevented me from really executing the attrition fight that I wanted to make.

Also my opponent couldn't miss under Star-Crossed, it was pretty impressive, we were both laughing at it by the end of the game.

My entire team got stomped this round, 0-5. We left for lunch with pretty low morale.