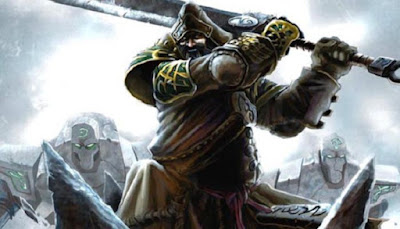 I'm testing for the Seattle Open this weekend (I have NO idea what I'm playing yet guys D: ), and this Baldur 2 list seemed really strong. I needed one more Stoneshaper to play it painted, so last night I sat down for an hour and finished the third one up before rolling up scenario.

My opponent opted for another Fyanna 2 theme force, which meant no AD for me.

The Scenario was Extraction, and my opponent won the roll off. He opted for first (dang it) so I took the side with the forest. 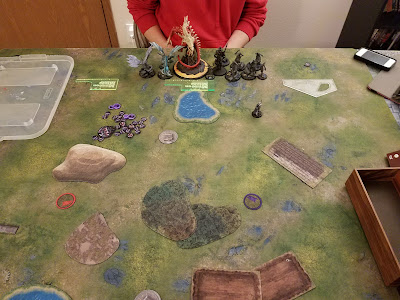 My plan here is to put the Wrath away from almost everything else so he can't get to Megalith and Baldur by charging the Wrath. I could also use Rock Wall to ensure that the Archangel didn't get into the fight until I wanted it to.

Also quick shout out to Broken Egg Games for sending me a preview set of the Circle War Sticks (you can see them forming my deployment line there). I'll be writing a review of them up in the next day or two time permitting, but suffice to say they are very pretty and they are VERY useful. 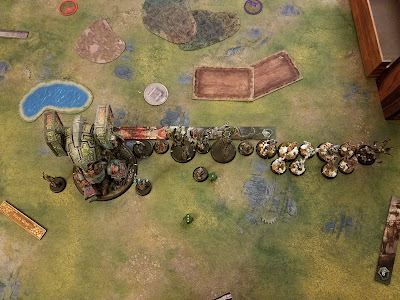 My opponent puts Prey from Anyssa on the right side Woldwyrd.

Everything runs. The Seraph casts Slipstream to move the Angelius up, the Forsaken eats a ton of fury, and the Raptors are already in my face.

Well I'm in a bit of a pickle here. I really don't get much of a chance to advance anywhere major, and I don't think I want to Feat just yet.

The forest is going to do a great job of preventing the Archangel from getting a charge onto anything but the Woldwrath, and he's going to have to Slipstream his Angelius around to have LoS to anything other than the Wrath as well.

Furthermore (as my thought process goes), if he puts Fury on anything, ANYTHING, it's dead if I keep my Woldwyrds alive.

Alright, we have a plan, let's execute it.

I premeasure out where the Archangel can and can't go, and then I premeasure my Woldwrath's movement and the Rock Wall. The Woldwrath runs (not for free guys because apparently Baldur only lets them charge and trample and throw for free).

His entourage of Stoneshapers moves up base to base with him.

I apply Sentry Mannikins to jam up the side. Megalith advances and puts Roots of the Earth on the Woldwrath.

Baldur moves up, casts Rock Wall and Roots of the Earth on Megalith, and forgets to purify again. Doh!

The Waldwarden moves up and casts Roots of the Earth on himself.

Both Woldwyrds hide in the bunker of heavies, and the Shifting Stones port around Baldur. 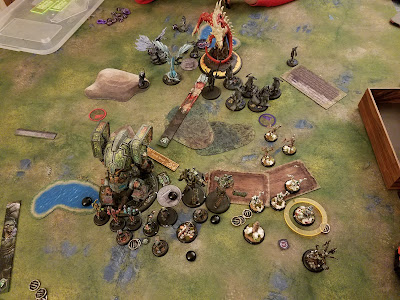 Now it's my opponents turn to be on the back foot!

He pulls fury and thinks. He's got two real choices here - back up and shoot a bit OR go all in.

This is Warmachine and Hordes guys, he goes all in.

Slipstream on the Seraph puts the Angelius in range of and in LoS of Megalith.

The Raptors clear out Mannikins with impact attacks and kill one of the Sentry Stones.

The Archangel moves up and shoots Megalith twice, but does no damage.

The Angelius charges Megalith, and does about a third to a half of his health boxes. 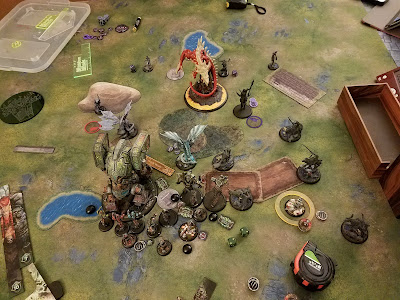 I pull in my fury, place a Mannikin, and drop Rock Wall. Megalith heals 3 damage between the Feat and the Theme force, and Baldur heals his one.

The Warden tries a double handed throw on the Raptor next to him and...misses. He buys an attack and hits, killing it.

The Wyrd behind him aims and shoots down the Raptor in front of Megalith. Megalith charges the Angelius for free, boosts to hit, and does good damage. He uses two more attacks to kill off the beast.

The Woldwrath goes into the Seraph, killing it.

All three Stoneshapers move up and pull a Fury off of the Woldwrath each.

The Stones port up out of the way, and the other Woldwyrd rolls a bit hot on his damage rolls and kills two more Raptors.

I have two choices here - I can save Megalith with the Rock Wall or I can try and save the Woldwrath.

I run some quick math in my head and determine that even with super hot rolls, the Wrath survives an Archangel with Fury on it, so I place the Rock Wall so that the Archangel can't land anywhere near Megalith. Baldur Feats and I pass the turn. 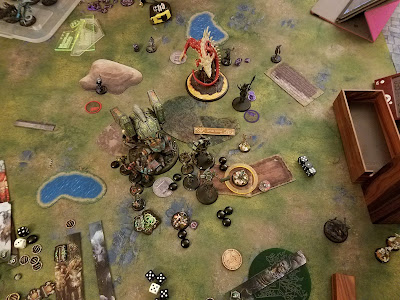 The Raptor on the right hand side charges the Sentry Stone, dropping it to two boxes.

Anyssa moves up, kills the Mannikin, and puts a shot into the Stone, doing nothing.

The Spell Martyr runs to control the flag, the Deathstalker moves up to control THAT flag, and Fyanna moves behind the house to cast Fury on the Archangel.

The Archangel moves up and proceeds to roll CRAZY FIRE DICE.

Yeah not even close. The Wrath takes 51 damage and nearly dies. I was scared guys.

After that minor heart attack, my opponent scores two points and calls it a turn.

Score 0-2
Advantage to the Blight

Things heal one point. The Shifting Stones pull 2 from Megalith and one from the Wrath, and Baldur pulls four from the Wyrds.

The Wyrds go first, and drop the Archangel to 10 boxes. Love me some Purgation shots.

The Shifting Stones pop a Healing Field. Megalith moves up, contests the flag, and kills the Archangel before casting Crevasse at the Spell Martyr, killing it, and then boosting attack and damage on the Raptor, killing it.

The Woldwrath moves up and punches both solos to death, landing on the flag.

My Sentry Mannikin controls the flag while the Stone sits behind the forest.

The Woldwarden charges and misses Anyssa.

The Stoneshapers move up and heal 15 damage off of the Woldwrath. Nice.

Baldur moves up and puts Roots of the Earth on both Megalith and the Woldwrath.

This time I score two points. 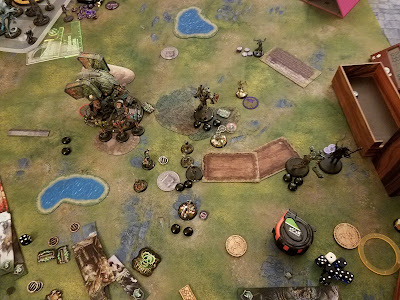 Fyanna moves up and tries to kill Megalith. Anyssa punches the Warden.

I score another point. 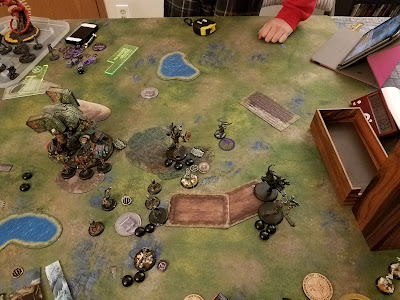 I'm sure many of you are going "Fyanna is RIGHT THERE, just kill her already!"

To get five points, I have to kill an auto hit objective at dice +1 and put a solo on one of two flags if I can kill a nearly dead Cavalry model with Megalith.

To kill Fyanna, I have to hit every attack because she has Dodge, which will ruin my plans.

I'm definitely going to go for the easy way out here.

I put down another Sentry Mannikin on the right side flag.

The Wrath moves up and kills the objective, and his entourage heals him another 11 damage. Sweet.

I end my turn and score 2 more points. 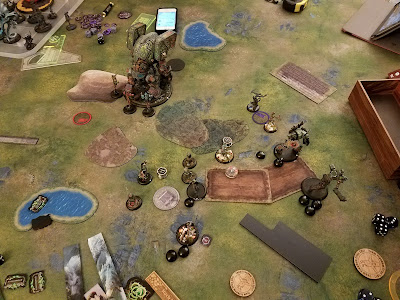 My opponent played a really aggressive turn 1 this game. I was backpedaling for the first two turns of the game, and the only reason I was able to survive was a combination of Rock Wall and my opponent not having a Naga in his list to hand out Wraithbane. My opponent could also have saved his Feat for one more turn I think, and I would have been in much bigger trouble.

I don't think Baldur can safely drop into a lot of Legion lists if they have the Naga.

Thanks for reading!
Posted by Jaden Wind at 6:53 AM