Another day, another Baldur 2 list to mess around with. Since I finished Tiny up, I decided I wanted to take him for a spin. I don't have Baldur 1 painted yet (I will be fixing that this week), I figured Baldur 2 was as good of a place as any to put him.

And my opponent was playing:

We rolled up Recon, and my opponent won, opting for first. I was lazy and took the side with the massive forest since I was sitting over there anyway, and then realized that my opponent had Awareness and that the forest was basically useless to me. 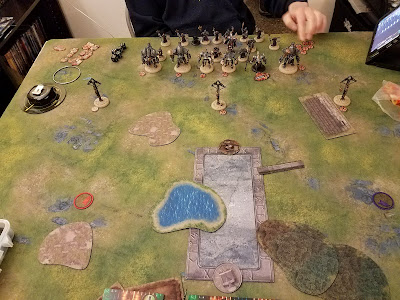 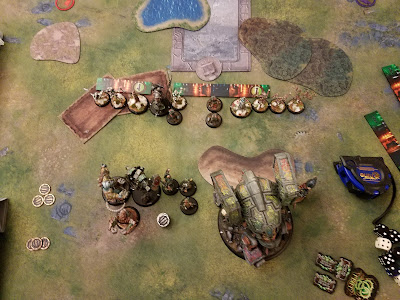 I put the Woldwrath on the right side since he was going to get shot at no matter what, and the forest was basically useless.

Baldur and friends would basically hang out in the trench all game providing Armor buffs and maybe the occasional Crevasse. My opponent had no less than 3 shield guards, so the Wrath wasn't going to get to use his gun to much effect.

Arcane Ward had started on Blessing of Vengeance, and Sevy allocated a bunch of focus to his jacks, all of which ran after receiving the Shielding Song from the Choir (No Spells). 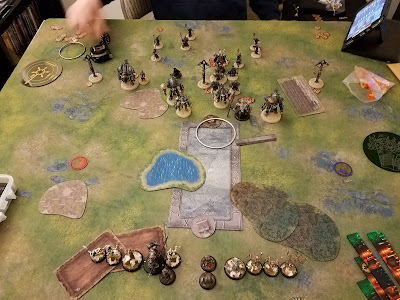 Without Eye of Truth in the list, my list isn't too concerned about Reckoner and Redeemer shots, even with Battle up.

One Sentry Unit went for the right forest to get Stealth, the other went left and used it's single fury to make a forest.

The Wrath ran as far forward as he could while being within six of Baldur.

Megalith trampled up and cast Roots of the Earth on himself.

Baldur cast Roots of the Earth on the Woldwrath and charged, ending in the trench.

The Bokur hung out near Baldur and the Sentry Stone, since I figured that was where my opponent would be shooting.

The Gobbers moved up to give things concealment, since Awareness doesn't let models ignore that - just line of sight blocked by clouds and forests. 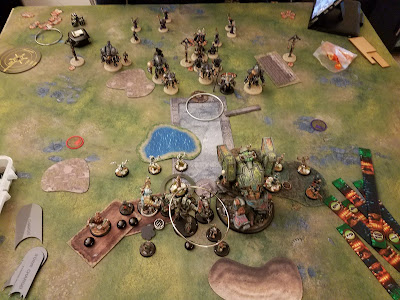 Not a whole lot happens this turn. I Shield Guard the Eyeless Sight Flare shot from the right hand Reckoner going into the Sentry Stone, and my opponent drifts some AOEs onto the Gobbers, killing them.

The Covenant sang No Knockdown, which was going to suck massively, and stayed within five of the important things.

For those interested, Battle was the chosen song this turn. 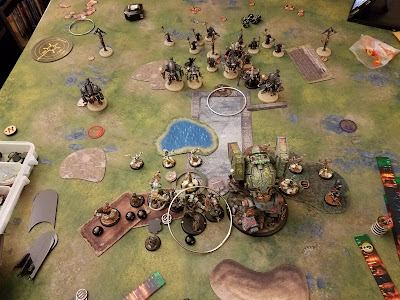 The Woldwrath can charge the right hand Reckoner, and I can use Rock Wall to prevent almost anything else from getting to the Woldwrath.

Unfortunately, I can only get ....zero..... sprays into the Book this turn, so the No KD bubble will survive despite my best efforts.

The Reckoner survives as Tiny misses 3 of 6 attacks on him, but Baldur puts his feat up with everything in central positions and a wall separating my beasts from his other heavies. 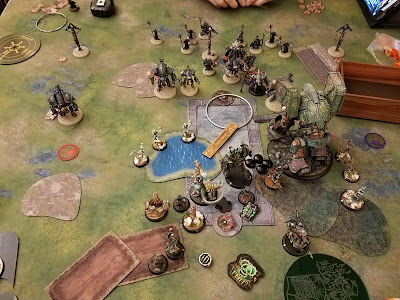 Commence beating on the poor Woldwrath!

Arcane Ward stays up, and focus gets allocated to both Blessing and the Reckoner on the Wrath.

Poor placement on my Bokur means that my left side Sentry Stone goes down. Sevy pops his Feat, killing my Blackclad and leaving the Bokur on 1.

The Reckoner and Blessing combined do 8 damage to the Woldwrath. 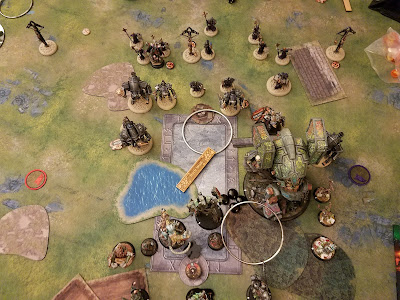 Time to start making bad choices. Instead of keeping Megalith safe and shooting the objective to death, Megalith casts Roots of the Earth on the Wrath and charges the Vigilant, doing minimal damage and then killing the objective.


The Wrath finishes off the Reckoner easily and then dings up Blessing.

Baldur casts a Rock Wall in a bid to keep Megalith alive, and then puts Roots of the Earth on himself.

Three sprays into the Book take it down to two boxes. 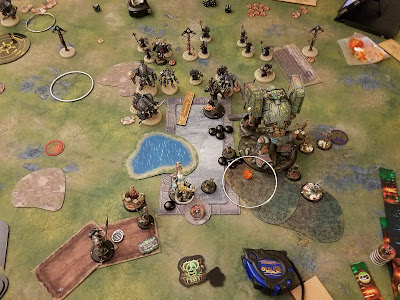 Battle goes up, and the Vigilant goes into Megalith, dice -6 on his first attack, casually does 11 damage.

Gaius and Cassian charge in and bring the Beast down to 15 boxes, which a charging Reckoner easily finishes off.

The Guardian runs around the edge of the pond, threatening Baldur. Severius casts Ashes to Ashes on the Mannikins, killing all three, and then casts a Hex Blast at the Bokur, which kills it. 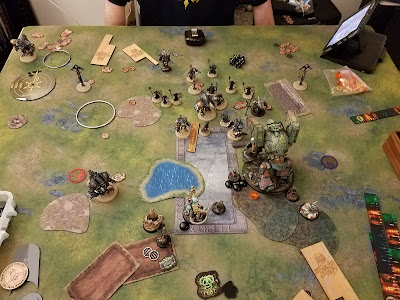 I have a couple options here. I can probably kill the Reckoner and the Guardian this turn by charging the Guardian with Baldur to make it speed 1 (making Enliven useless) and then having a Primaled Pureblood go into it.

The Wrath would be able to move in and kill the Redeemer at minimum and the Reckoner as well most likely, leaving not much that can handle an ARM 20 spell immune self healing Garg.

Alternatively, I could go for two boosted 9s to hit at dice damage on Sevy, who isn't camping any focus.

I decide to go for the latter.

The Wrath moves over, draws LOS to the Menite, blasts him with his gun, and ends him with a boosted POW 15. 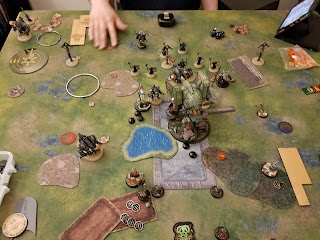 Dang I like my Woldwrath. I haven't put him on the table a whole lot in mark 3, but he's a monster with Roots of the Earth on him.

I feel more comfortable with this version of the list than I do with the triple warpwolf version, but I'd like to try them both more into the factions I want them to play into rather than say Legion with Wraithbane everywhere.