I'm running a three list, 8 person cap event this weekend, and my local Skorne player wanted to practice into the three list pairing being brought by one of the Menoth players, so instead of playing Circle like a good Druid I strapped on some Menofixes and brought out the Popes of Nopes.

My opponent's three list pairing is Zaadesh 2 with triple shield titans, Xerxis 2 with Hydra and Tiberion, and Rasheth in the shooting theme.

I was pretty sure Rasheth was never seeing the table against Menoth (thanks Passage!), and I felt like my three list pairing of Amon, Kreoss 1, and Reznik 2 was really bad for Zaadesh.

That being the thought process, I was torn between Reznik and Amon. I ended up dropping Reznik because I've seen him played more and am more comfortable with his list. It also only has two warjacks, so I don't have to remember focus allocation as much!

I dropped Reznik, he dropped Xerxis.

My opponent won the roll off and opted to go first. Baddddddd. The Scenario was incursion.

Idrians chose the Hydra as prey. 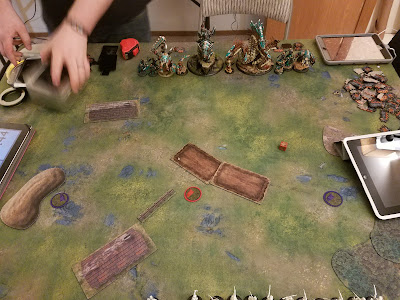 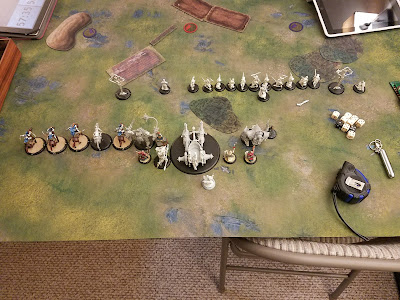 Full speed ahead with basically everything. Ignite goes on Tiberion, and the Shaman casts Desert Storm to keep his models safe from the Idrians. 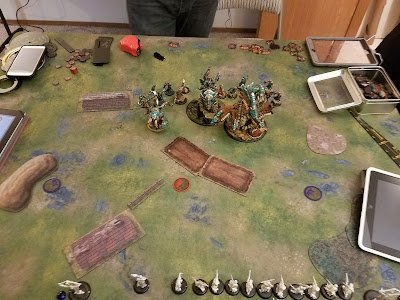 Idrians spread out wide. Lamentation goes up, but I was a derp and forgot to allocate a bunch of focus to Scourge, so I have to sing no spells with the choir.

I put Eye of Truth in the Hydra's charge range since I can't really not - that thing threatens 14 inches with Xerxis. I keep Reznik and Scourge away from the Hydra.

The Flamebringers go way left, since I think I can get a solid Scenario push there.

Alten does 5 damage to Tiberion's Spirit and backs the crap up. 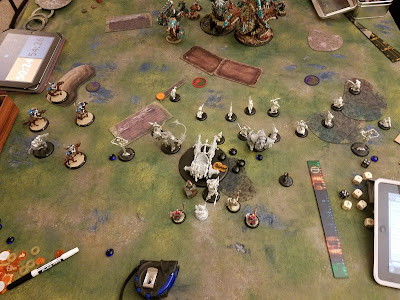 He needs to kill two Idrians to really make room for the Hydra, and this is done by the Shaman zapping one, and then rewinding so my opponent casts Rush first (Lamentation folks, it's a spell) and then moves up and shoots.

Tiberion charges in at two others and murders them dead.

Xerxis puts Ignite on the Hydra and pops his Feat.

Beast Handlers Enrage and Prod the Hydra, which charges in and kills Eye of Truth and three more Idrians. 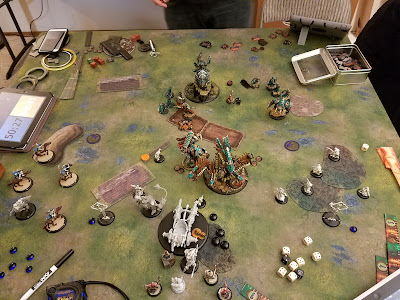 Well....the bait worked, so time to see if I can do anything with it. Two to Scourge.

Alten aims and blasts Tiberion, leaving his Spirit on one box.

The Punch Monk charges in his back, but misses the important columns.

Scourge gets Battled, Boundless Charged, and goes to town, killing the Hydra dead. Prey switches to Tiberion, and I get two charges on him. Once again, I forget to use the mini feat.

The two charging Idrians leave Tiberion on six boxes, and a crippled Spirit.

Flamebringers charge and kill a couple of Beast Handlers before repositioning back to control the left flag.

I get one point. 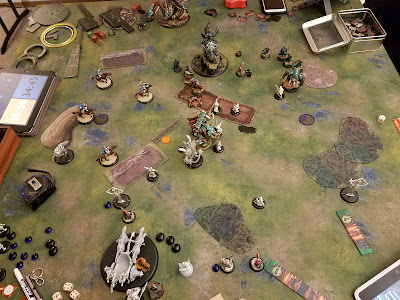 My opponent kills some Idrians with Xerxis, and he Sprints over to the right hand flag after putting Ignite on Tiberion.

Tiberion lays into Scourge HARD, leaving him on nine boxes after his three initials and crit smiting him away.

The Shaman moves over and zaps the Daughter Cav on the flag.

The Gladiator has to Rush himself and charge to kill the last contesting Idrian, and my opponent scores two points. 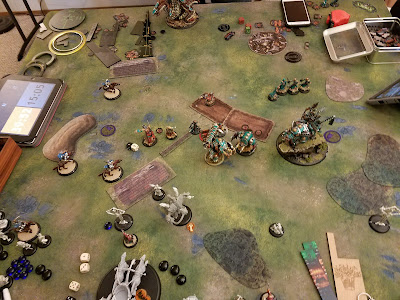 Well I have a couple of options here. The (probably correct) play is to shake KD, Battle Scourge, Boundless charge him, move Reznik up to curse Xerxis, and then try and kill him. Mat 9, 3 attacks at dice +1 and one at dice -1 should kill him since he's only camping one.

Instead, I decide to get cheeky and test the limits of the Madelyn/Devout combo.

The Daughters kill the Shaman and reposition back to the flag.

Reznik moves up, pulls from a Wrack, casts Boundless Charge on Scourge, and curses the Gladiator.

Madelyn parlays, and a HUGE mistake here I run my Devout to Reznik's left side.

Scourge murders the Gladiator, and Prey switches to Xerxis.

The Guide charges him and does ten damage O.o

I get another point. 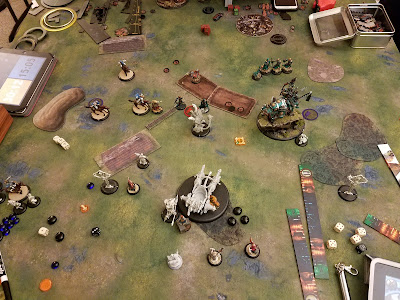 My opponent has one chance here, and it's my own fault. He can get Orin into range to zap the Devout, and then potentially get two leaps into Madelyn.

He gets his Beast Handlers out of the way and contesting both flags, and Orin moves up after getting Puppet Master.

He misses his shot, re-rolls, and then only gets one leap.

Xerxis kills Scourge and sprints back, getting one point. 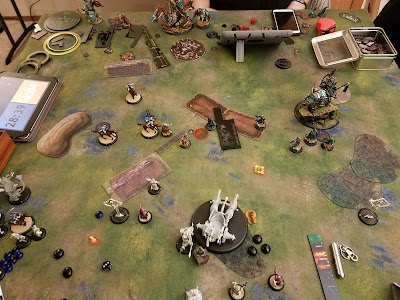 Reznik charges, curses, and kills the three Beast Handlers on the right side before Repositioning into the flag.

The Devout runs to control the middle, and I score three more. 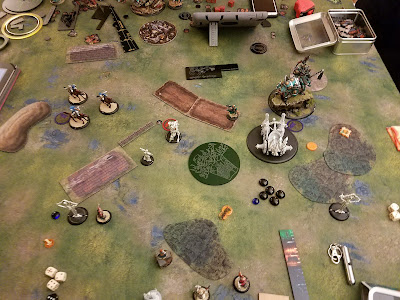 Score 5-3
Victory for the Druids!

This is a terrifically hard matchup. I made two major errors this game. The first is not going for the assassination run when I had it since I could have gotten Scourge plus a The Flesh is Weak into Xerxis, which probably kills him.

Secondly, the Devout should have been on the other side of Reznik, and then Orin never has a chance to kill Madelyn. We rolled it out after and Xerxis would have left Reznik on 3 boxes, but still.

Alten was a BEAST this game, doing 15 damage to Tiberion over three turns and preventing him from killing Scourge. MVP for sure.