For round two, I was paired with my PG mentor, the man who really helped me see what running events and fostering community growth was all about. I would have made far more mistakes and done a much worse job without his guidance at the beginning.

He was playing Ret, and as is his custom, one of his lists had two huge based models in them. His pair was Garryth double Hyperion and Thyron with a bunch of weaponmaster ugliness.

I knew I wanted no part with Durst into Thyron, and I felt like Sevy was reasonably okay into both lists, so I dropped Sevy.

I was playing Sevy, and this is the list that Chandler has been refining for months. He recently piloted it to the second day of the LVO masters event.

We were playing Extraction, and I won the roll, choosing to go first. 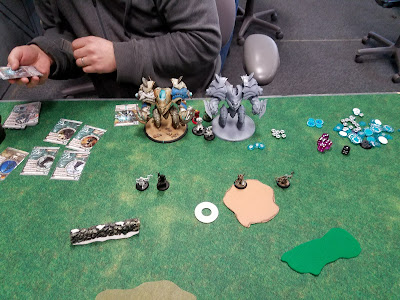 I wasn't 100% confident that I loved my chances here, but the Fuel Cache cloud coupled with the forest on my objective could keep Sevy relatively safe.

I just needed to wait out his Feat and counter. The Hyperions die to a jack and a half on average, so if I can keep them alive long enough for that to happen, I might be okay?

Vision goes on the Avatar, Defenders Ward goes onto Eye of Truth, and everything runs.

The fire forest in the middle coupled with the other forest on the right on my opponents side means that I should be able to keep the Avatar from getting charged by a Hyperion. If they trample, Avatar survives no problem. 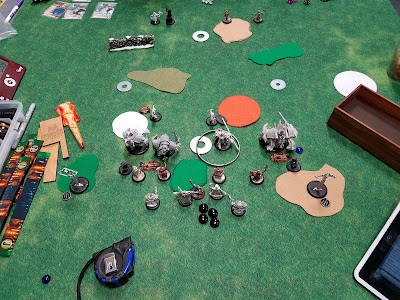 My opponent puts Sentry on the right side Hyperion, Mirage on Garryth, and runs at me.

Eiryss moves up and strips Defenders Ward off of Eye (whoops, haven't played against her in so long!), and repositions back. 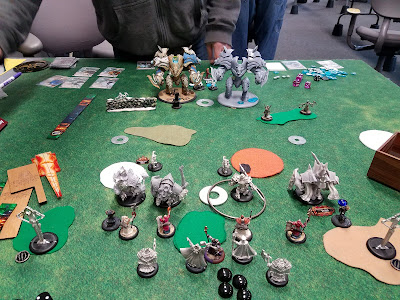 Well I kind of have a plan. Avatar is going to pop Gaze and run behind the forest on the right. I'm going to arc Ashes to Ashes at him and blast Eiryss and Narn off the table, leaving just a trampling Hyperion to get to him.

I'll keep Eye of Truth and Hand back, using Hand to spray Eiryss and hopefully kill her.

I move up Blessing and chuck Ashes to Ashes at the Avatar, and only roll one bounce. That bounce, at dice +1, doesn't kill the MHA.

I throw another one at the Avatar, and kill the MHA, but only do a couple to Narn. Uh oh.

Hand moves up and misses Eiryss, and then I'm an idiot and move Eye of Truth into charge range of the left Hyperion. *Facepalm*

Yeah so many mistakes.

I move both Monks up and use Shifting Sands Stance. 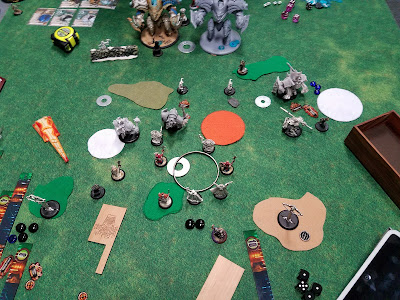 My opponent upkeeps his spells, and his Sentry shot scatters onto both Monks perfectly, forcing tough rolls on both. One of them makes it, and the other dies.

Both Hyperions get loaded up.

The MHA on the left charges Eye and I ignore the attack with Oracular.

He moves Eiryss up and kills his own MHA, and then repositions back so that Hyperion can charge in.

Arcanists make the Hyperions hit even harder, and the left one charges in and slaughters Eye.

Narn charges Avatar and does about 8 damage. The other Hyperion tramples up and buys an attack, which I use Vision to avoid. His second attack does 12 damage.

My opponent moves Garryth up, barely catching the Avatar and pops his Feat. 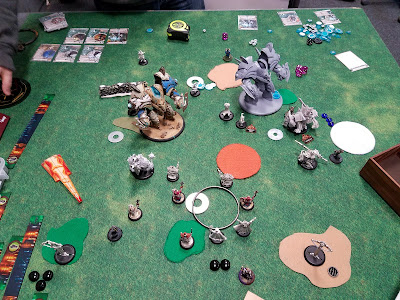 I'm in so much trouble.

There's only one bright spot, and that's that I can catch Garryth in my feat, reducing his control area to 8 inches and making it okay for the Avatar and Hand to use Focus.

Avatar rolls a 1 for Focus. Typical.

I allocate 1 to Hand, and then charge the left Hyperion with Rhovens buddies. Dice start to go off the rails, and I end up doing about 15 damage with them.

The Monk also charges the Hyperion, doing another 3 or four.

Sevy moves around the cloud to the little niche between it and the forest. He pops his Feat, and then starts throwing Immolations at Hyperion. Since Hand is right there, these are POW 15 spells, and I do a fair amount more.

Choir sings Battle on Avatar and Hand, but can't get Blessing.

Hand moves up and takes down the battered Colossal with a focus to spare.

Avatar gets a free focus from the Vassal, and then nearly kills his Hyperion (dice +3 is okay I guess), and Blessing moves in and does some more damage, leaving it on 8 boxes. If I'd been able to Battle up Blessing, or if the Avatar had rolled one more focus, the Hyperion would have gone down.

I end my turn, somehow in a good position despite my disastrous placement from the turn before. Sometimes the dice gods love you. 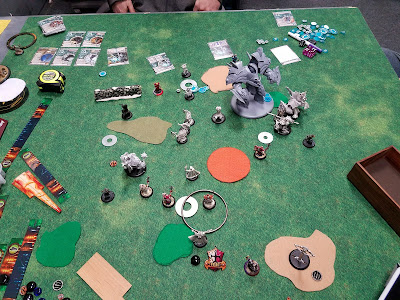 Garryth drops Sentry, but upkeeps Mirage and moves closer. He allocates one to the Hyperion.

Mega Mittens kills off the Punch Monk and a Rhoven bodyguard. 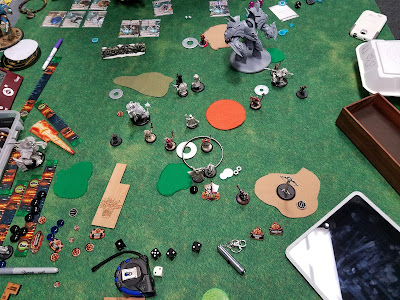 Druidic Menites turn 4:
Well..Garryth is camping two and he needs to die.

Hand gets Battled and also gets a free focus from the Vassal. He moves over and sprays the objective. I need an 11 to hit Garryth, and I nail it, doing 5 damage through a focus.

Sevy gets Harmonious from the Heirophant, pulls a focus from the Wrack, and is able to put enough Immolations into Garryth to kill him on the last one. 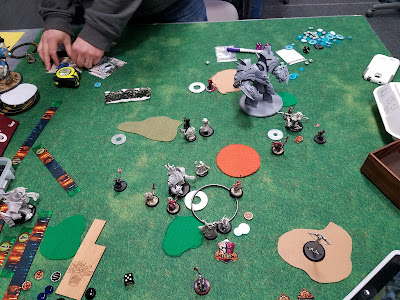 Victory for the Druidic Menites!

Dice. That's the only reason I won this game. I positioned poorly and paid for it, and only the ridiculousness of Eye of Menoth added to some very good dice allowed me to claw this one out.

It took me a good 20 minutes to relax down from this game, it was a real nail biter.