In case you hadn't heard, Skorne is a strong faction now, and Makeda 1 is one of their Warlocks that I really don't want to play against unless the Scenario massively favors me.

Unfortunately, that's what I ended up playing against. My opponent had a shooting heavy Morghoul 2 list with no Soulward, and that ultimately meant he would be playing Makeda 1 against my massively Stealth heavy lists.

I won the roll off and windmill slammed going first. The Scenario was Extraction. 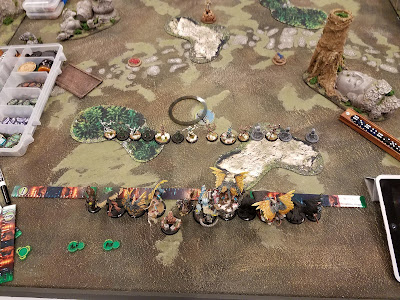 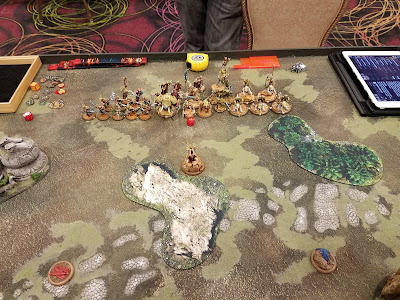 And we were off!

Time to run at him and force out his feat turn 1.

Mirage on the Pureblood, Hand of Fate on a Sentry unit, and everything runs. Una gets into the little pocket of clouds and forests where she will stay the entire game. 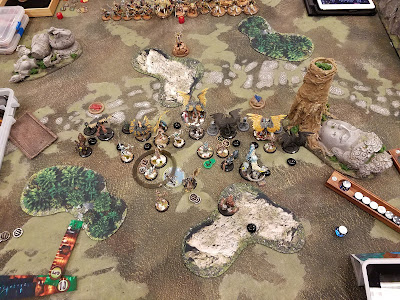 He does something similar. Quicken on the Keltarri, Ferox runs.

He spends about five minutes carefully arranging the models around Makeda so that no small bases can fit next to her, and he does an amazing job of screening off his beasts from charges.

Unfortunately for him, his placement in the back wasn't quite so perfect, and I was about to capitalize on that. 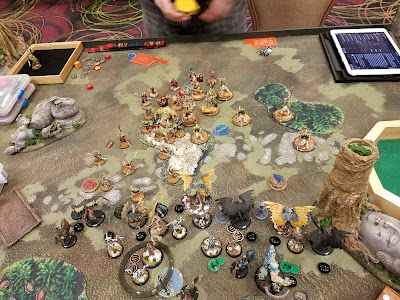 This turn began the long hilarity of both players' dice. I couldn't hit fives for anything, and he got to dodge his Ferox around no less than six times.

Una kept her spells, and she went first and popped Feat.

Griffons ran, three engaging Karn in the backfield, and a few more getting in around Radheim.

I killed a few Keltarri with Hand of Fate and back arcs getting me the odd hit here and there, but that was basically my turn. 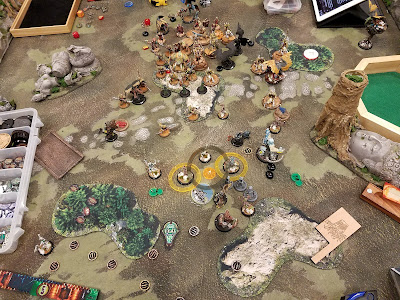 He was in a bit of a mess and he knew it. His Keltarri attacked Mannikins, Shifting Stones, and a Blackclad. I'd made the Stones sacrificial lambs to stop his Legends from doing much.

He got one or two Ferox onto the Pureblood, but he also couldn't roll to hit and so the beast took a few points. 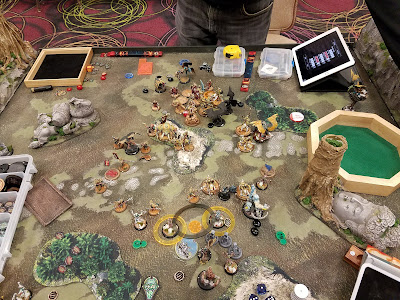 I leached Fury, and the first Griffon went to work on Karn, doing....five.

I was able to kill Karn with a second Griffon, headbutt Makeda with a third, and wail on her with a fourth, but because I was a moron and didn't kill the Gladiator like I should have before going in on her (Hand of Fate on the Pureblood would have done it I think), she survived on...one box? I did kill the Gladiator, all the Ferox, a few more Keltarri, and most of the Krea though. 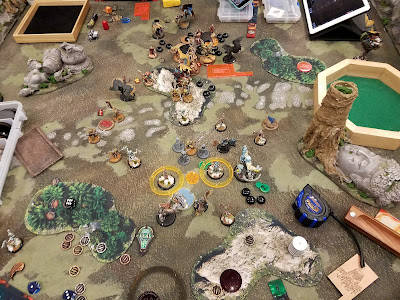 He gets to do things, and birds start dying.

One of the legends smites a griffon into another griffon, rolling all sixes for damage and one shotting the bird. Various other griffons get massively wounded, but Makeda is still engaged by two Griffons at the end of the turn. 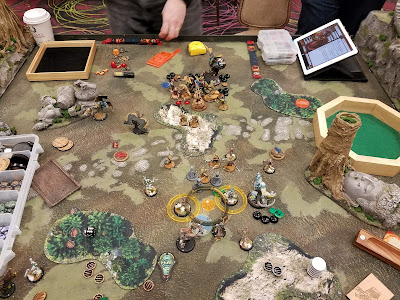 I try for Scenario, but I can't kill the Keltarri worth anything, and settle for getting one point.

Makeda dies to beaks and claws. 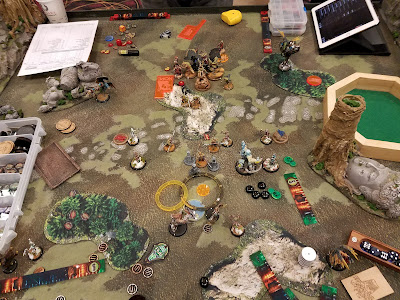 Score 1-0
Victory for the Druids!

My opponent played such a tight game here. He gave me exactly one opening and man did I go after it hard. I was super impressed with his play and with his list AND with his painting ANDDDD with his manner. He was super friendly and extremely enjoyable to play with.

On to round three.