Round two, guaranteed top 8, and another really hard matchup.

Julien is another one of those incredible Warmachine players from Texas (why are there so darn many?) and he was playing a really nasty pair - Haley 2 in theme and a Stryker 1 list in a theme that he called "Janky Crap".

We were playing Take and Hold, and I figured Wurmwood was probably the right play into both of his lists (so many eLeaps), and was delighted when he dropped Stryker instead of Haley. Haley is a scary lady, and while Stryker does have a time walk feat, it's a manageable game if I can make him do that on my feat turn.


And my Wurmwood list, for those of you who haven't read the last few reports:


I won the roll off, and since we were playing Take and Hold, I windmill slammed going second on side with a reasonable chance to build forest walls in. 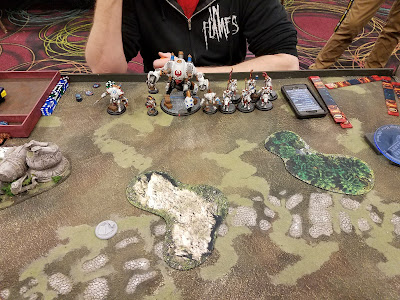 I made a massive mistake on deployment here - I put Cassius on the wrong side of the table. I was intending to use him to kill a Shambler turn 1 and complete my LOS denial, but then I randomly was like "nah, he's good on this side instead. 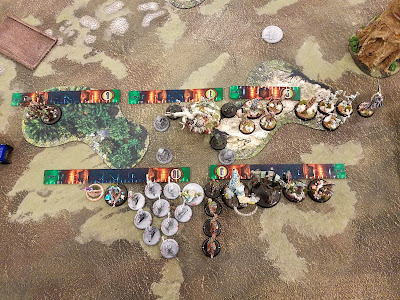 Things durdle on up. Julien does quite a bit of premeasuring for his next turn with Reinholdt and Stryker here, so I have no illusions that one of my Sentry Stones is dying no matter what I do. 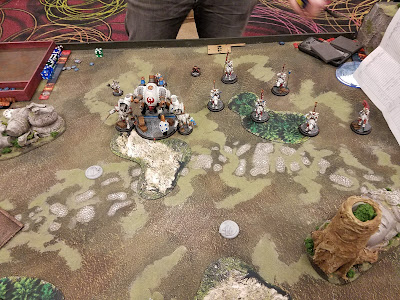 I'd realized my deployment mistake the second I clocked back over to Julien, and now I was going to pay for it.

I build a forest wall as best I can, and then use the forest on my left to give Lanyssa and my Grove stealth, as well as to hide my Woldwyrd in but still within striking range of the hill.

Everything else advances up onto the hill to make it problematic for lances to hit things. 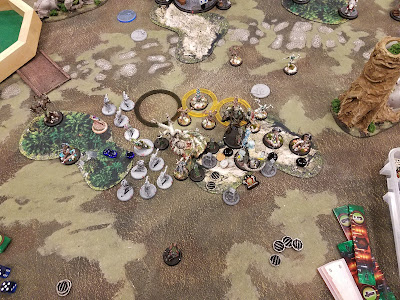 What I'm expecting is a feat and jam play, but what happens instead is a turn of shooting. I somehow don't have a picture for this turn though.

He re-casts Snipe on Dynamo, and then moves over behind the Firefly.

Reinholdt moves up and strips Stealth off a Sentry Stone, and the Stormwall blasts it to death and puts down covering fire.

The Stormlances back off slightly to stay out of range of things.

Dynamo gets the +2 to hit from Jack Marshal, and murders the Bokur and a few Shamblers.

I craft Wurmwood a talisman, and then port him up on the hill.

Cassius runs to make sure Wurmwood can Dark Path back to the flag.

My two right hand Woldwyrds nearly kill the Firefly, but keep missing those sevens to hit.

Megalith durdles up in charge range of the Stormwall, for next turn, and casts Stranglehold at the Firefly.

Wurmwood activates, Strangleholds the Stormwall and then casts Curse of Shadows on Dynamo before porting back to Cassius and popping his Feat.

This is a nice little break. I finish things off by moving the Woldwyrd on the left up and casually killing Dynamo in two shots. Yeah.....

All of a sudden I felt really, really good about the game.

I score one point. 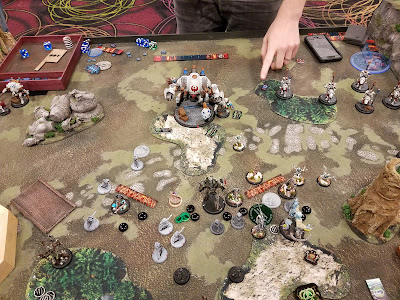 Julien is in a bit of a spot here. Dynamo wasn't supposed to die like that (although the math says he does only live through a Woldwyrd shooting him with three boxes), and I've been much more aggressive on Scenario than I think he was expecting.

He allocates nothing and upkeeps Arcane Shield.

It's Feat turn. Stryker moves over and pops his Feat.

Stormwall moves to contest the flag on the left, and the Stormlances get pathfinder from Alain before walking up, killing some dudes, and then repositioning into the flag.

Laddermore runs to get inside the feat. 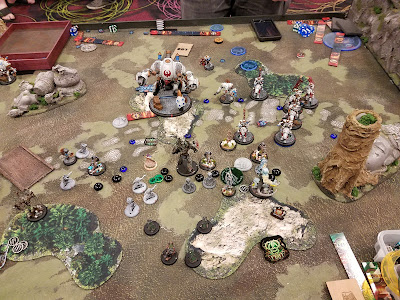 Time to try and murder everything?

Between two Woldywrds and the Pureblood spraying, I kill off three Stormlances.

Cassius runs away so Wurmwood has somewhere to go if things get rough.

I look at the table and decide I need to sacrifice Megalith to the Stormwall this turn.

I run lots of guys around the flag on the left, and the Woldwyrd over there takes 5 out of Arlan's 8 health.

I port one unit of stones up so they are within healing field range of Woldwyrds, and I port the other unit out to make it impossible for the Stormwall to trample and land near Wurmwood. 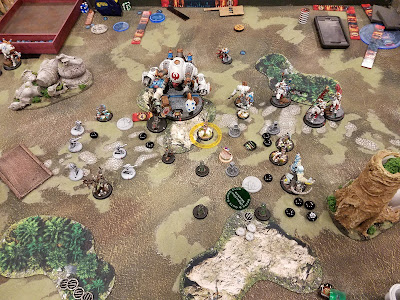 He can't ignore Megalith, so the Stormwall gets a focus, and Arcane Shield stays up.

Lances charge in and fail to kill anything, but do knock out a few systems.

Arlan gives the Stormwall a focus, and the Stormwall misses one attack, leaving Megalith on one. Stryker moves up and kills Megalith, and Julien passes the turn. I upkeep Curse of Shadows and go to ten fury.

Stormlances die to Woldwyrds, but I can't dismount Laddermore without committing the Pureblood, who fails to kill her dismount. At least she's not contesting.

I get Curse of Shadows on the Stormwall, and charging Shamblers do about twenty damage to it. Nice!

The remaining Bone Grinder charges and kills Runewood, and I use the far side Woldwyrd to kill off Arlan so the Stormwall can't be repaired.

I port the Shifting Stones around the Pureblood and Wurmwood, in easy range to leach fury and then either heal or teleport.

I score another point. 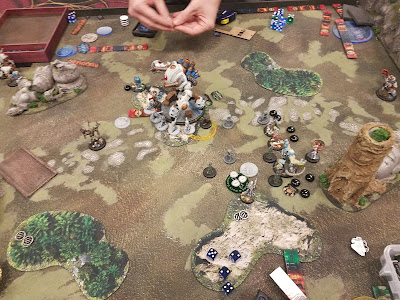 The Stormwall kills all of the Shamblers easily. Stryker moves up and nearly kills the Woldwyrd, but decides to camp a couple of focus in case I get cheeky and try a spell assassination.

Laddermore walks up and pokes a Woldwyrd, but doesn't cripple anything. 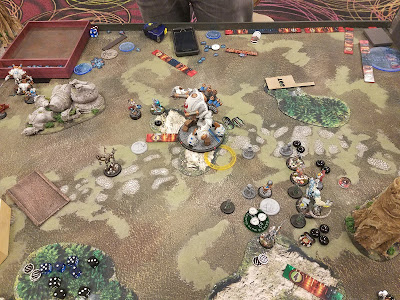 I upkeep Curse of Shadows and use the Woldywrd engaging Laddermore to put her down.

The other one boosts some damage shots into the Stormwall, doing something like 10 more damage.

The Pureblood gets ported into the Stormwalls back arc and Warps Strength. The Stormwall has about 25 boxes left, and the Pureblood easily takes it down.

I score another point, and Julien calls the game. 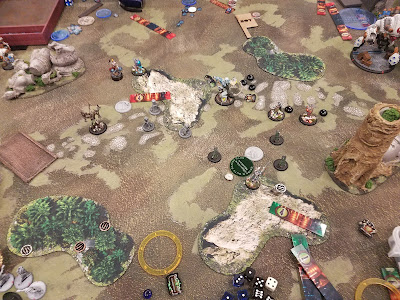 What a grind. This game really showcased the power of Woldwyrds. Between them, they killed an entire unit of Stormlances, Dynamo, Arlan, and 1/3 of a Stormwall. Not bad at all!

Julien and I talked about the game at length afterwards, and basically we decided that upkeeping Arcane Shield on his feat turn was the wrong play. Without Purgation, the Woldwyrds are much less likely to kill them, and I can ignore it with Wraithbane anyway.

This was another excellent, excellent game. Julien was a great opponent, and really pushed both me and my list to the edge of what I could handle.

On to round three!