Going into the Semi-Finals, there were three Circle players and a Convergence player. I really didn't feel great into any of the lists (or the players, the shark tank at LVO is real!), and looking back at it, I hadn't eaten or had anything to drink in about 8 hours at this point.

Ready or not, I was paired with Tom Guan in the Semi-finals. He had a Wurmwood list that was similar to mine and a REALLY cool Baldur 2 list with the Storm Raptor on Una 1.

He dropped Baldur, I dropped Wurmwood.

I won the roll off and chose second, taking the side with the big forest.

Also I forgot that Una 1 gives her battlegroup Birds Eye - I haven't played her with anything but Scarsfells in so long that I just remember they have tracker. 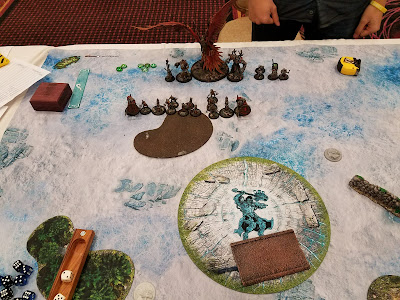 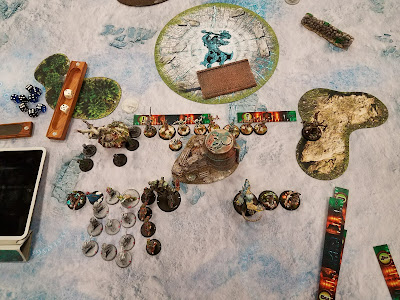 He runs at me turn 1. No spells up, nothing. Una snuggles into the Storm Raptor and stays in the trio of Shifting Stones.

Megalith tramples at the very end and puts Roots of the Earth on the Storm Raptor. 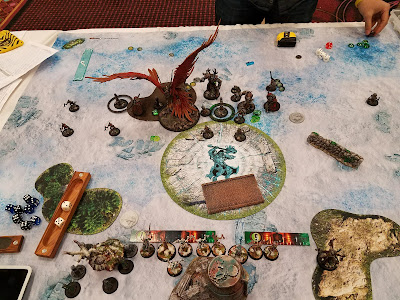 This turn kind of signals how the rest of the game is going to go, and it all starts so innocently.

The Bone Grinders craft Wurmwood a talisman and then try and ritualistically murder eachother like they do every game, but I miss two attack rolls.

I have a Woldwyrd shoot two of them, but miss once and then the second one toughs.

Basically I can't get to three souls on the tree to save my ilfe.

I port Wurmwood to exactly 12 inches from the Storm Raptor, and Tom kindly reminds me about Birds Eye, so I try, and fail, to Stranglehold the Raptor before camping four.

Megalith tramples up and also tries to Stranglehold the Raptor, but fails.

I brace for impact. Tom likes to go for assassinations I've been told, and Wurmwood is within charge range.

Unfortunately I really don't have a choice here. He's up a gargantuan to my three lights, and I need to bait it out in order to have a chance.

I flood the zone and pass the clock. 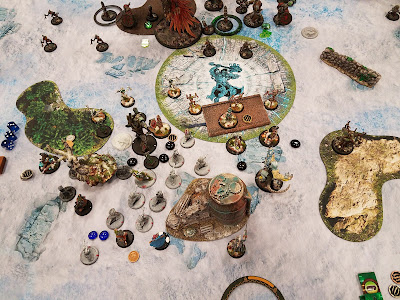 Una gets ported up, casts Dog Pile at Wurmwood and misses somehow, and then casts it again and hits.

The Storm Raptor charges in but fails to kill Wurmwood. Phew.

Everything else he has toes the zone and he passes the turn. Una is camping nothing. 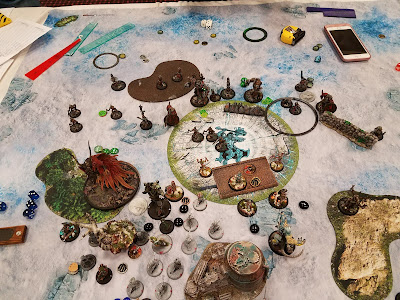 I place a Mannikin in melee with Una, and another in the zone.

Una dies to the first Mannikin attack, and I breath a sigh of relief. I was still playing in my head with Mark 2 wild beast rules, which meant that I thought the Raptor was stuck where he was. (Spoilers, I was wrong).

Lanyssa casts Hunters Mark at the Bokur in front of bad Megalith (she couldn't reach Megalith with it).

Wurmwood gets Curse of Shadows onto bad Megalith, and yanks Cassius back.

My Megalith charges and kills bad Megalith, but for some reason I don't buy my last attack on the knocked down Bokur.

One of my Woldwyrds kills his Central Sentry Stone, and I push into the zone with Shamblers.

I score 1 point, and Baldur does not thanks to a contesting Mannikin. 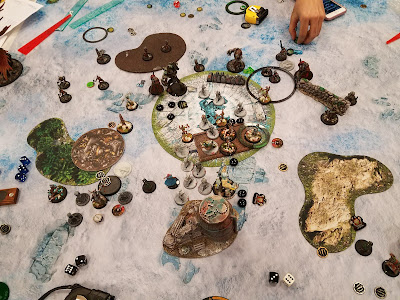 Tom spends a few minutes reading the Wild rules, and then has me look at them to confirm we both get it. Turns out, you can literally run a Wild warbeast anywhere now. Uh oh.

He clears a landing spot for the Storm Raptor.

His Pureblood warps Strength and kills Megalith (remember, I had to transfer to him).

The Raptor runs, taking one pretty good free strike. Baldur walks up and spends a fury to restart the engine, and I'm suddenly in big trouble again. Baldur Feats, and casts a Rock Wall as well. 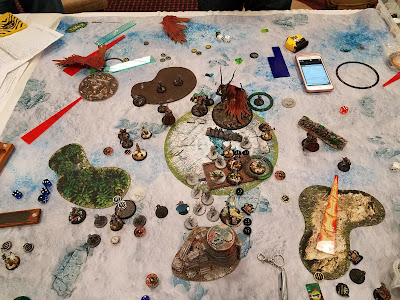 This is the turn where things started to go really wrong.

I get Curse of Shadows on the Storm Raptor and put Wraithbane on one Woldwyrd and the Pureblood.

And then I don't Feat because I want the Bokur to charge the Pureblood.

What I SHOULD have done is simply put Wraithbane on both Wyrds and Strangleheld the Storm Raptor before popping feat.

This would have let me shoot the Raptor down to about half health, protected Cassius, and let me get another point, all the while making his entire list basically useless.

Instead, I get greedy and charge the Storm Raptor.

I miss my charge and one bought attack, and my Woldwyrds whiff for damage rolls, leaving the thing on 17 boxes.

I jam the Pureblood with the Bokur (again, he should have been hanging out in the back of the zone under Wurmwoods feat here).

I get another point. 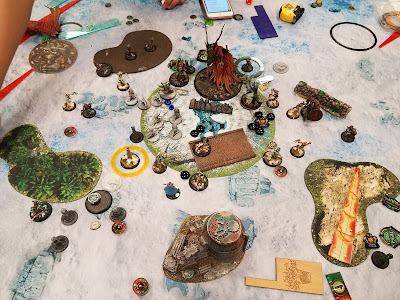 Turns out, Curse of Shadows lets any model move through the model.

The Gobber Chef and Bokur do some damage to the Pureblood, and then Baldur finishes it, putting Roots of the Earth on the Storm Raptor.

The Storm Raptor kills the Bokur, and the Pureblood assaults Cassius, killing him and the Sentry Stone next to him AND contesting. 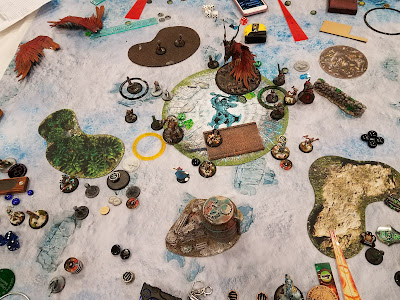 I see an opening here. If I can kill the Raptor with two wyrds, a charging pair of Shamblers, and Lanyssa, I can use the other to kill the contesting Shifting Stone. I can port Wurmwood into the zone, Hellmouth the Pureblood OUT of the zone, and Hellmouth the two contesting models to death (if the Sentry Stones don't kill them first).

Long story short, it takes every single attack I have to kill the Raptor, and I don't kill the Chef.

I Hellmouth the Pureblood away from the flag, and then I just sit on four fury with no transfer targets instead of healing up to 10 boxes. I feat.

I surround the Pureblood with Shifting Stones and score again. 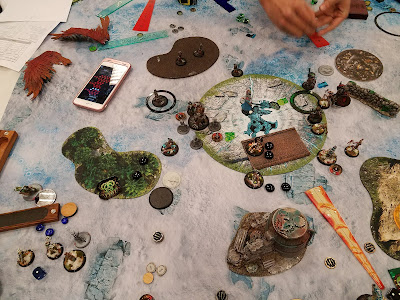 Tom has Baldur heal the Pureblood to full. The Pureblood Warps Ghostly and tramples to Wurmwood, killing him. 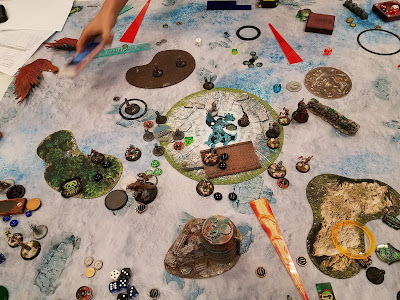 Victory for the (other) Druids!

This was such a grind. There were probably ten people watching this game just shaking their heads at the craziness as Tom and I traded advantages back and forth. I feel like I made a couple of critical mistakes in the later turns that cost me the game, although the only reason I've found them is by looking back at the game over and over and over again. ( I had a long plane ride home with not much else to do).

If I'd gone with the plan of Feating a turn earlier and whittling the Storm Raptor down, my Pureblood would have lived, and the Raptor would have been dead after one more turn of shooting and having the Pureblood charge at the end of that. If I'd healed Wurmwood every turn after the first, I would have likely liver through the Pureblood assassination.

Those two mistakes cost me the game. I'm incredibly impressed that Tom was able to salvage his situation after turn 2 - the guy is an incredible player.

I'll be writing a "what now" article at some point in the next couple of days, but I was very happy with my performance at the LVO. Breaking into the semi-finals undefeated was a huge accomplishment for me, and I'm extremely excited to look ahead to the next set of tournaments in 2017.

Thanks for reading!
Posted by Jaden Wind at 8:12 AM