I have felt, since the beginning of mark 3, that Reznik 2 was a caster that Circle had no advantaged game into with any caster. Lamantation, Boundless charge, and Curse [Battlegroup] combined with a very durable, hard hitting, accurate warcaster pretty much nail every single thing Circle doesn't want to see.

I think that's about to change.

2Una offers Circle a way to outthreat his warjacks (by 0.5 inches, but we live in a pre-measured world so that's enough), a way to prevent my models from dying for a turn, and a bunch of threats that he can't just ignore or tank with Reznik himself.

My opponent was playing:

We were playing Outlast and I won the roll off, going first. 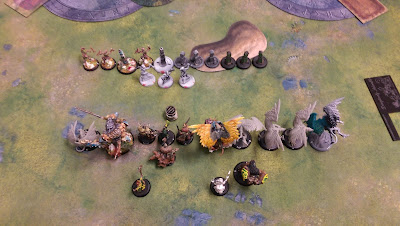 And my opponent deployed Reznik WAYYYY away from the bulk of the Griffons. 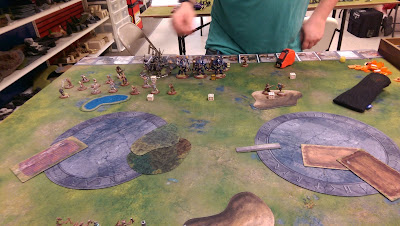 Hand of Fate on a bird, Mirage on the Death Wolves. Shifting Stones port aggressively, and models run. 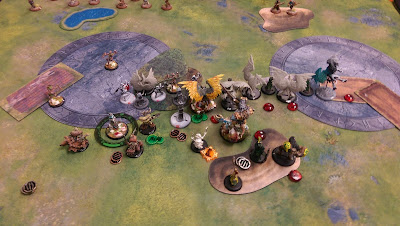 He's in range with both Reckoners to the foremost Griffon, but it is behind a wall.

He gives one Eyeless Sight with Rhoven, battles up with choir, and the Reckoner advances. He needs a boosted 14 to hit behind the wall, and isn't able to do it.

Idrians move up, Alten shoots a Shifting Stone, spiking damage and doing 3, and the rest of the list shuffles around. Rhupert puts tough on the Idrians.

Reznik shoots a Flesh is Weak into my lines and it scatters onto a Griffon. Sad.

The Allegiant moves into the right zone and Shifting Sands up. 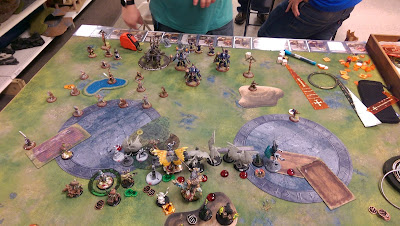 He's left too many models too far away for me to pop my feat this turn.

I devote a ridiculous amount of resources to killing the Punch Monk. The blue Griffon engages, Una casts Hand of Fate on the one next to it and moves into the zone.

The spelled up Griffon charges the Monk, hits the first attack and the stupid thing toughs. I hit my second boosted attack, and this time he dies.

Mannikins and Death Wolves murder things in the left zone.

I bunch things up too close, and that will cost me next turn, but at least Nicia and a bunch of Idrians are dead? 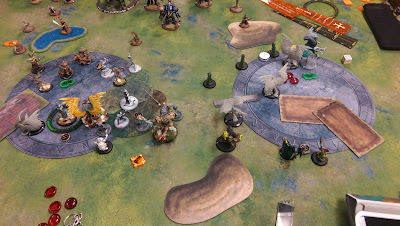 My opponent moves Alten up, shoots the Shifting Stone and misses, and then Repositions into the zone.

His Reckoner has charge range to the bird with Hand of Fate on it by a millimeter.

Reznik casts Boundless Charge on the Reckoner, and then charges in, kills some Death Wolves, and casts Flesh is Weak at the Sentry Stone, hitting both birds. *Sigh*. He repositions out.

The Reckoner charges and murders the bird.

Idrians finish off the Death Wolves and some Mannikins and contest. 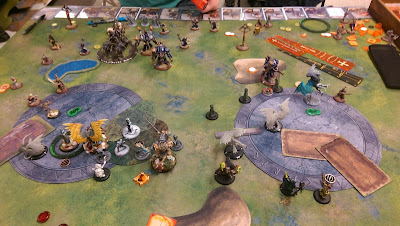 Alright, I have a chance to score 3 points here and keep Una safe.

She moves into the Trench, casts Hand of Fate on a Griffon, and shoots Alten to death. She feats.

The Gorax moves up and puts Primal on the same Griffon.

Griffons go in and murder the Reckoner dead.

The left zone gets cleared, and I run the Stalker at his Reckoner to block things up a bit. 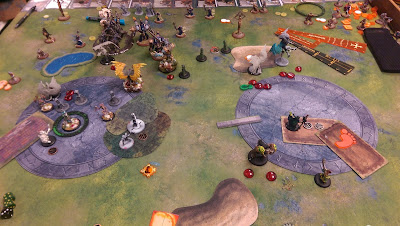 He can get his Reckoner into the zone and charge the Primaled Griffon with it if the Stalker is dead.

Reznik casts Boundless Charge on the Reckoner and moves up to hit the Sentry Mannikin...and misses two times.

He casts Flesh is Weak at one of the Griffons and sits there.

Scourge moves up and murders the Stalker.

The Reckoner charges in and kills the Grey Griffon, contesting by about 1/4 inch.

Idrians swarm and contest the zone. 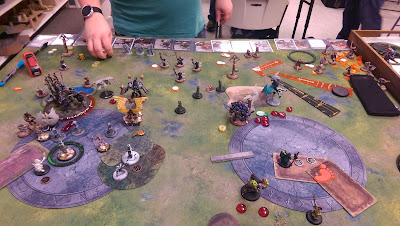 With flank, each Scarsfell does an average of 5, 4, 4 to Reznik for their initial attacks. They then get to buy 3 more good attacks at 5 damage each for a total of 28. I had three Scarsfells there, so Reznik takes something like 84 damage.

Alternatively, Una can just aim and Thunderbolt the Reckoner out of the zone with an attack or two.

I get two more points after doing just that and go to 5. 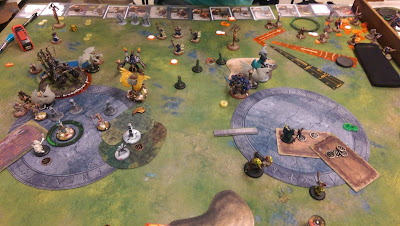 Reznik 2 is one of the lists that I've been terrified of up until now. Tanith has a game into it, but it's not a great game and it largely comes down to terrain and placement. With the release of 2Una, I really think that Circle has a strong game into the Menoth casters that really prey on the faction, and that's pretty exciting.