Still one day to go until the battle engine CID comes out, and so once more I donned the robes of a grand inquisitor.

I decided to play the new hotness and see just how good Incite really is.

Daughters of the Flame
Idrians and CA
Choir (min)

We were playing the Pit, and my other buddy had put a big old house in front of one of the flags, so the second I won the roll off I windmill slammed second, taking that (house) side. 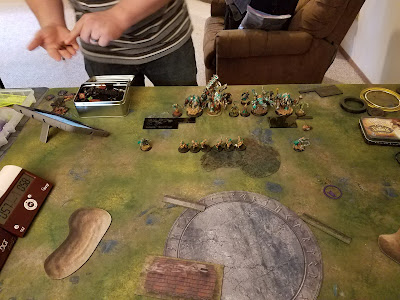 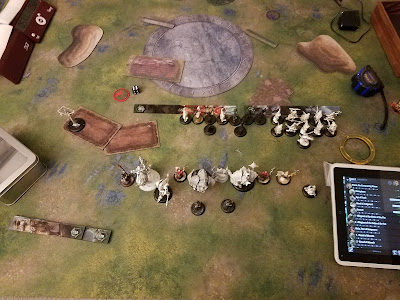 My opponent has a lot more heavies than I do, and he can easily tie up my Idrians with Bloodrunners, so I have to force him to come to me by getting ahead on Scenario right off the bat.

With the house in the way, he would eventually have to commit heavies since I have so many sprays, and it would go from there. I felt fairly confident that Eye of Truth wasn't dying to anything but Tiberion in one go, and even then maybe not.

Prey goes on the Cannoneer.

Bloodrunners and Master Tormenters all Apparate up. Mordikaar goes first, casts Host of Shadows to give his battlegroup ghostly, advances and casts Hollow on the Bloodrunners.

The Bloodrunners all run up and hide behind the house, with a Master Tormenter on either flank.

His beasts run up fairly centrally, except the Gladiator who puts Rush on the Cannoneer. The Cannoneer advances, casts Far Strike on itself and deviates a shot perfectly into three Idrians, killing all three. 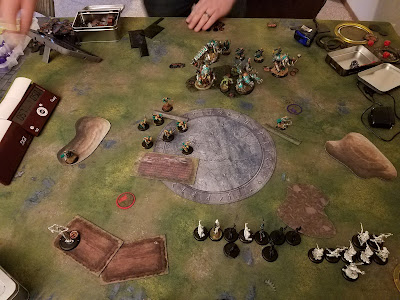 I make ALL KINDS of positioning errors this turn.

Daughters run up and flood the zone, one charging a Bloodrunner and killing it.

The right Punch Monk moves up and goes into Shifting Sands Stance, and the left goes base to base with the house, also in Stance.

Feora moves up to the flag after casting Redline on Hand and sprays the Bloodrunner, missing.

Hand moves up, sprays the OTHER Master Tormenter and I somehow blank and give it the cover bonus in my head, so I have no idea if it actually hit or not. I did fry two Daughters though. *Facepalm*

Idrians just sort of advance and try not to die.

I position Eye so that if he puts anything into the zone, I can probably kill it. 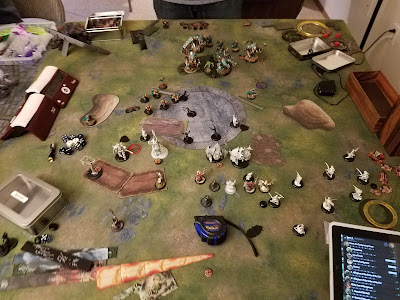 Despoiler moves up and within five of the closest Daughter to me remaining.

The Void Spirit charges that Daughter, kills it, a new Void Spirit is formed, and then ports into the Punch Monk, killing it and then killing sprees into Feora and whacks her.

The other Void Spirit walks up to the right.

Mordikaar casts Host of Shadows again, moves up, Revives a Bloodrunner, casts Far Strike, and boosts into the Punch Monk with his last Fury, hitting and killing it. He pops his Feat.

His left Bloodrunner kills my Wrack and Sprints out.

Beasts run up and Screen Mordikaar, and the Cannoneer misses a shot and kills some dudes with blast damage.

Critically, my opponent has not contested my flag with anything, and Mordikaar was unable to make it onto his flag. 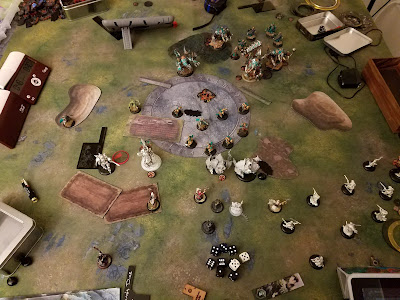 Time to kill as much as I can and score 1 I suppose.

I spend about ten minutes thinking about slamming Eye of Truth into his Despoiler, but I ultimately decide to play the long game.

Nicia walks up and kills the Void Spirit in front of Feora before Sprinting away.

Feora gets Harmonious, walks over, Feats, casts Fire Step to kill a couple of guys and moves back to spray some more. She then Repositions onto the flag.

I kill a few more Bloodrunners and the Void Spirit with Hand of Judgment, and then the Devout charges and kills the Tormenter on the hill.

The Idrians move up and put a 3 man CRA into the Cannoneer, doing 5. 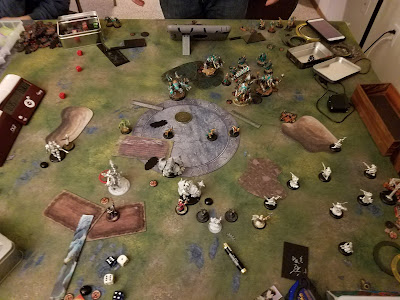 I've given my opponent a couple of interesting choices. Tiberion cannot reach Eye, and the Despoiler is too far away from the Beast Handlers to get a free charge. Furthermore, Eye will get the house bonus and be DEF 14 against melee attacks thanks to Ashen Veil.

My opponent runs the Feralgeist to base with Nicia, and then shoots it with the Cannoneer, missing and deviating.

The Despoiler runs to the spot where the Feralgeist was, and Mordikaar moves over, casting Revive a bunch of times.

Tiberion scoots into the zone.

I score another point and my opponent scores 1.

I apparently failed to take a picture of this turn. Don't worry, next turn not much happens placement wise.

I check, and Despoiler is outside of Mordikaar's control area. I toss a focus on the Devout for fun and upkeep Redline.

Nicia and the Devout charge in, and leave Despoiler on one box. Ouch!

My Idrians literally miss every attack they make on the Bloodrunners, which is even more embarrassing when Hand casually flames a couple of the blasted Paingivers off the table.

Eye gets Enliven on him and baits for Tiberion.

I score a third point, and my opponent a second. 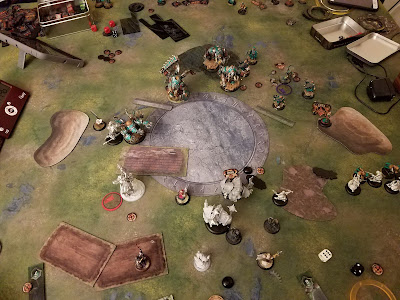 My opponent Enrages Tiberion. The Cannoneer gets Magical Weapons from the Soulward and shoots Eye for a few.

Gladiator Rushes Tiberion, and the elephant goes in. Eye tanks the charge, Enlivens out, and uses Oracular to ignore the free strike.

Mordikaar moves over and heals Despoiler for two.

Despoiler rotates to see Nicia and the Devout hits him with a Defensive Strike, knocking out Spirit. Despoiler fails to hit Nicia, which means he cannot spawn a Void Spirit to contest.

With me going to four and then instantly to five, my opponent concedes. 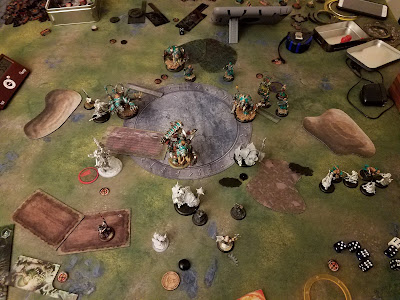 I think I played the game about as well as I could have here - I force my opponent to commit to me where I would be able to kill him off without losing massive things in exchange.

Even if Despoiler had created a Void Spirit and we had tied up at 3-3 in the final turn, I would have been able to upkeep Redline, have Eye go in at PS 22 and kill the Cannoneer, cast Incite and kill the contesting Void Spirit with Feora and Fire Step before flaming Tiberion and sending Hand in at PS 22 and a free charge, most likely killing him to clear the zone and go to five.

The critical thing here was really forcing my opponent to come to me with the Scenario pressure, without that, I 100% think I lose this game as he has more heavies and higher damage output than I do.