I felt like really crushed the pairing round for this matchup. I got my Vlad 2 player into the Captain of Team Salt who was running Caine 2 and Caine 3. I was able to match Fyanna into Non-Kreoss 1 Menoth, and I got Doomshaper into Karchev, which also felt like a good matchup.

Myself? I was playing my regular Menoth opponent, and we had played this matchup what felt like a dozen times. He had an Amon list that he had built to be all the desert things (Idrians, Amon, Punch Monks etc.) and also a Thyra list.

We were playing Recon, and there was an off center obstacle, so I knew I was playing Baldur.

He chose to drop Thyra.

I won the roll off and decided to go first. He took the side where his Fuel Cache cloud and a forest would be able to block my LOS. 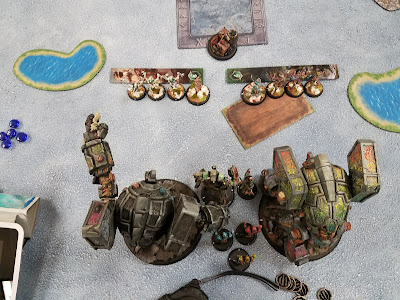 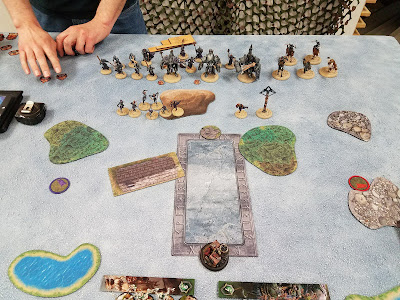 Smalls and Tiny gallop up the field. I cannot even remember if I bothered to put up Roots of the Earth this turn since my opponent has no shooting.

Baldur moves up and Purifies himself. 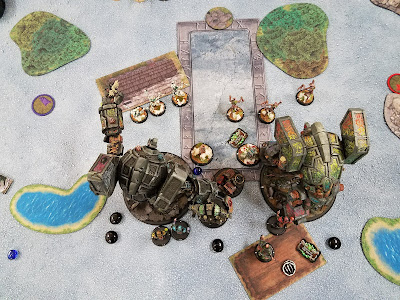 I have given my opponent one Mannikin to charge if he wants to. He goes for it, and the rest run to engage.

Thyra puts up Silence of Death on the Knights, Occultation on the Flamebringers, and Gates of Death on herself.

Knights run up on the left, Flamebringers scream up the table on the right. His Jacks all move up behind the cloud/forest wall.

His Punch Monks do Shifting Sands Stance and move up. 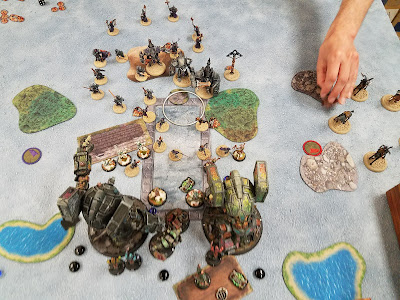 I'm about to get to try out one of the Woldwrath tricks I've been wanting to. I place a Mannikin in the middle of his Daughters and Monk.

Mannikins activate and spend an absurd amount of Fury to kill off two Daughters.

Smalls shoots the central Mannikin, killing all four Daughters there, and doing enough damage to the Monk to force a Tough Check, which it passes (curses!).

Tiny shoots the Knight in the zone, boosting blast damage on the Punch Monk next to him but failing to kill.

At the end of the turn, I've put a huge no-go zone for his Knights if they want to be relevant.

Megalith puts Roots of the Earth on Tiny and Baldur casts Rock Wall to prevent the Avatar from getting to either of my Wraths. 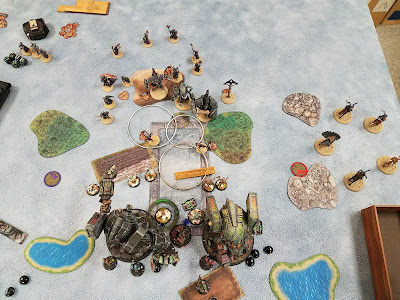 My opponent chances his left Punch Monk moving up, and it dies to the lightning storm. The other one moves up out of the one he was in.

The Avatar pops Gaze and runs, catching Tiny in it. 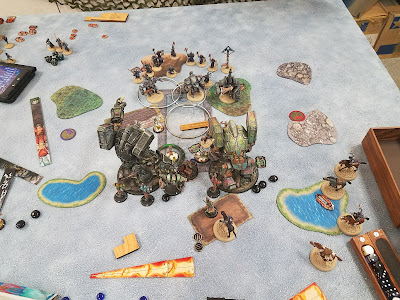 Well...I can't really say no to the Avatar can I?

Mannikins move out of the way and spray the objective. Tiny charges and smashes the Avatar to bits.

I put a lot more into the objective, ending with Smalls' gun, and it still doesn't die. That being said, there's a lovely 5 inch AOE of death to Knights Exemplar between them and Tiny.

Megalith pops Undergrowth and the other Stoneshaper kills the Punch Monk (yes!).

Baldur moves over, pops a Rock Wall, and uses his Feat. 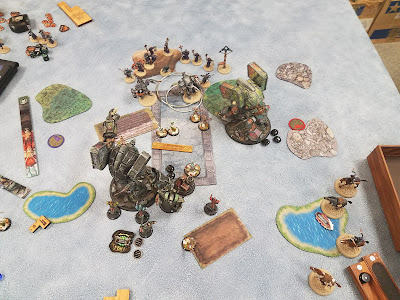 Blood gets two Focus and Apparates up. Thyra charges Tiny and Feats.

The Choir awkwardly cannot get to Blood without going through the AOE of Death, but they do battle the Castigator.

He moves up and Combusts the two Mannikins away before bashing Tiny with a bought attack.

At the end, Tiny has about 33 boxes left. Thyra pops over to the flag with Gates of Death. 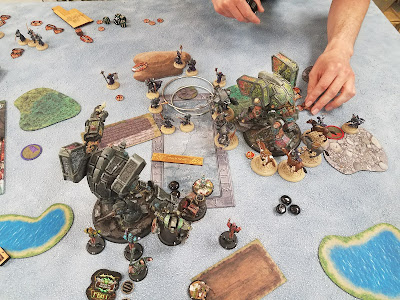 Tiny smashes Blood to bits and then knocks the Castigator down.

Smalls charges and kills the Castigator but cannot quite reach the objective.

The Daughter Cav does another five, and the lone remaining KE goes in and finishes Tiny off.

Many tears were shed. My opponent and I agree that Menoth ought to raise Thyra's husband from the dead as payment for this.

My opponent scores a point. 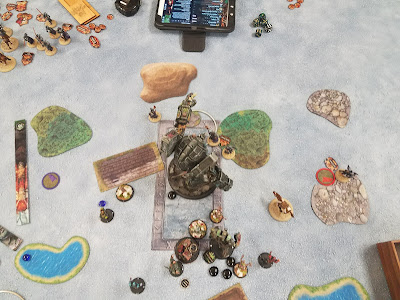 Smalls, in a fit of rage, tramples over four guys and kills them all before realizing he cannot see the objective anymore.

Stoneshapers and Mannikins and Megalith and Baldur ALL have to put spells into killing the last two guys in the zone.

A Stoneshaper kills off the remaining Flamebringer, and another goes with him to contest. 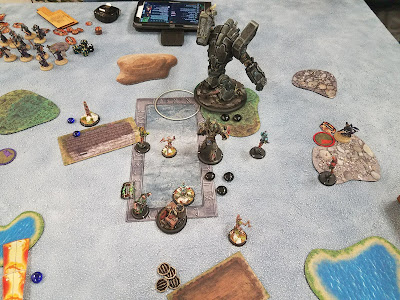 Thyra charges and kills a Stoneshaper before Strangleholding the other one to Death and porting back to her flag to score a final control point. 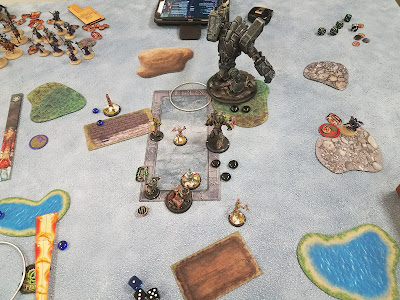 Pow 11 Weaponmasters do not deal with ARM 23 58 box stone monkeys very well, and even less so when I can trivially put down a wall to prevent their poor pathfinder-less selves from charging me from all angles.

Thyra going bananas there was quite a sight to behold, truly terrifying.

As for the team? The matchups paid off. Kayazy Eliminators under Vlad's feat killed Caine, Doomie Ground out 5 control points against Karchev, and Fyanna killed Feora, leading my team to 9 wins overall and first place!

Most impressive? The event started at 9:30 and we were done by 3:30, including a thirty minute lunch break. Props to our EO, I have never been to an event with such a tight time-line.