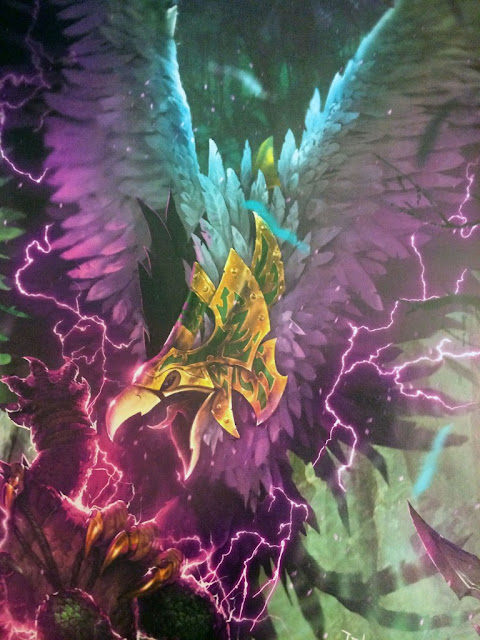 Oh hey guys, Stormy here. Jaden left his laptop alone without locking me up and I'm not terribly interested in "hacking" his Facebook page so I will be writing this battle report as it features ME.

Man, what kind of font is this anyway? It's so boring. Let's see....what kind of trouble can I get into....


How's this? Nah too old school.

This one is called Georgia, and it's really boring.

Wow, this blog has terrible options for font. Ah well, I will persevere, for I am Stormy, Great and Terrible is my name and before me all will become lightning barbecue for dinner.

I mean...Let's get to the report shall we?


Boss man made me work for Kaya for this one, which is much better than the last couple times - Kromac is a mean, mean man...beast...thing.

I also had a couple of other guys with me - not as cool as I am but I suppose they're alright.

Oh what the heck, here's what I had to work with. Feel bad for me, it was pretty miserable.

And we were staring down a bunch of blighted balogna led by a mean horned ogre dude.


Boss man tossed the square rock thing better than the other dude and decided that we got to do stuff first! Oh yeah, here comes the LIGHTNING!!

I mean...we got set up like this. Why are we fighting over two big trench things again?


And the other dudes got set up too...I wish they looked tastier. Blight makes my tummy hurt.


Good Guys Turn 1 - Or how I totally looked boss and got stronger:

The little teleporty stones (Jaden's note - Sentry Stones) did their magic and made forests. The wolf bros (Jaden's note - Feral and Stalker) ran up and hid behind the forest. It's really neat how they do that; I try sometimes, but even making myself as small as possible, it doesn't seem to work.

Kaya's little pooch also ran to keep up with me. (Jaden's note - Laris)

Kaya cast a spell on me which made me stronger and more nimble! (Jaden's note - this was Forced Evolution).  She did some cool thing (Spirit Shift; Sheesh, don't you pay attention to anyone but yourself Stormy?) and ended up right next to her doggy. I flew super fast opposite the little flying pipsqueak of a blighted thing - I'd show him who was boss!

I was wondering why we were basically ignoring the little trench thing right next to us, but decided it probably wasn't really that important.

The Bad Guys were scared of me! #StormyOP They didn't move up very far because I am a FAST bird, boo yah!

I don't like it when things are fuzzy, it's harder to barbecue them. 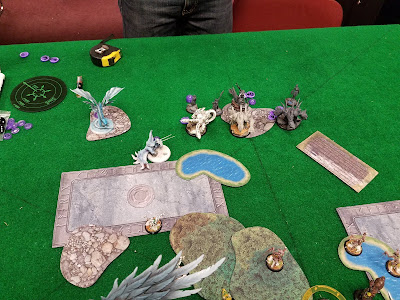 Kaya looked real hard at the battlefield, and even though I wanted to go in soooo bad, she wouldn't let me. Something about what I killed not dying for real? I don't get it, too high above my paygrade, I'm just here to look good.

Anyway, she kept that super spell (Forced Evolution for those who forgot) on me and her puppy (Laris) ran through the forest.

I flapped a little bit closer, and the fuzzy made it so that I missed my first lightning bolt. That made me pretty mad, so not only did I hit my second one but I gave it a LOT of juice and that scythe dragon (Scythean) looked reallll hurt. (It took 11 damage actually, hehe)

Kaya tried some bone headed thing (Casting Muzzle to be precise) through her doge (can you believe it lets her cast spells through it? I'd be annoyed as crap) but it looked like it didn't work. Maybe her eyes were all fuzzy too. The doge teleported back to her as well. (Spirit Shift again)

The wolf bros (Feral and Stalker again) moved up as well, and the ogre dudes (Ogrun Bokur) chilled out by their special rocks.

Speaking of rocks, their stick guys (Mannikins) didn't do a whole lot to that scythe dragon. Looks like I gotta carry the team, as per usual.


Extended Jaden note - I carefully premeasured so that nothing of mine was getting charged this turn except Mannikins by a Scythean or Mannikins by a Carnivean.

We were all cleverly too far away from the icky dragons for them to do a whole lot, but the scorched scythe one (Scythean) came in and twirled a very nice pirouette (Threshered) and killed all the stick guys near him.

The fire-ball dragon (Ravagore) shot a fire-ball at the ogre guy next to me, but didn't kill him or the Druid Dude. (At this point I realized that I'd put an extra Blackclad on the table. As the one on the hill had taken damage already, that's the one I kept in play and removed the other one from the table. Glad I caught that before I got multiple Hunters Marks off in one turn, I would have felt really bad) Fire don't scare me neither, I just floated above it.

The multi-head dragon (Typhon) ran up to me and so did the little annoying flying thing (Angelius).

Everything was still fuzzy (Fog of War was upkept), and the big dragon (Carnivean) with the spell (Draconic Blessing got upkept as well) on it got spiny again, and so did the really bad dude (Spiny Growth on Thagrosh and Carnivean - can't the bird remember anything?).

The really big dragon sprayed fire all over one of the rocks and it melted. Poor rock. (Carnivean killed the Sentry Stone with a Spray) 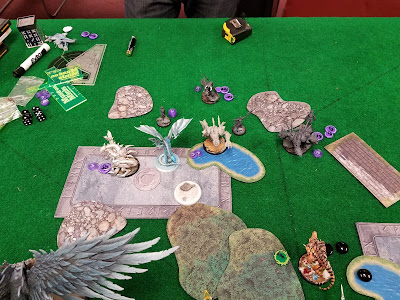 I really felt like I was going to get the go ahead here, and I was impatient to go.

First, Kaya's little doggy ran into the forest again, and she did something to the fire-ball dragon (Dog Pile - what an awesome spell) and all of a sudden I could see it through the forest!

She also did her super magic spell (Feat) and cast ANOTHER spell on me, the kind that's probably like 'roids except better and it makes you super duper angry. (Primal)

And then the little Druid next to me threw a piece of Salmon on the weird rock thing and I couldn't help myself. I totally went for it. (The Blackclad cast Hunters Mark on the objective)

After I got it, I remembered what I was supposed to do and promptly tore the lotsa-heads dragon apart and ate the stupid flying thing. Mmm....barbecued flying dragon. The rock thing fell apart from all the lightning at some point. (Stormy killed Typhon and the Angelius, and his charge attack on the objective at dice +3 did 13 damage, so the several eLeaps into it eventually killed it)

The Wolf-Man with the Sword went after the fire-ball dragon, but he didn't kill it OR the seriously crispy scythe dragon and then teleported back to Kaya somehow. (Stalker couldn't stay outside of Thagrosh's aura of -2 Strength and, while he didn't kill either beast, really messed them both up. Less than half health on both) Then the stripey cat-dog thing went after the really big dragon, staying outside the bubble of grossness coming from the really bad guy just like I had.

HE screwed up TOO! Don't ever hire a dog to do a Raptor's work friends, it doesn't end well. It looked like he messed him up pretty good though, and then he also got teleported back to Kaya. (Feral went in and nearly killed the Carnivean, leaving him on 3 boxes) 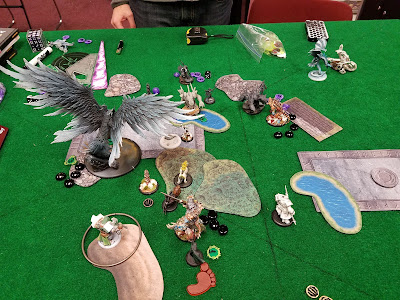 Ogre boys chilled out by us bigger boys and that was basically that. 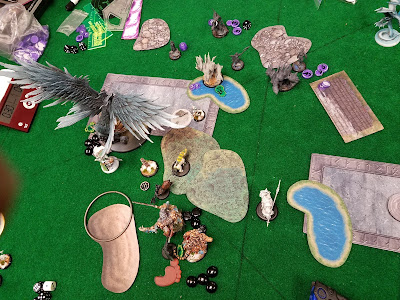 I AM LIGHTNING, I AM THUNDER! THEY WERE ALL THUNDERSTRUCKKKKK!!!!

Wait there's a little winged dude over there, what's he doing? OUUUUCCHHHHHHHH. THAT BLOODY HURT YOU STUPID THING! (Forsaken came over and blew up, doing 15 damage to the Storm Raptor)

After that, a whole bunch of healing happened from the big bad man and...wait the multi-head dragon CAME BACK FROM THE DEAD??? WHAT THE CRAP??? (Thagrosh moved up and Feated, and also sprayed Stormy who clearly isn't remembering that with the shock of Typhon coming back)

Then the scyth dragon came in and REALLY hurt me.

Then the fire-ball dragon came in and...wait am I reading this right? I DIED THIS TIME??? NO NO NO, I AM OUT, JADEN CAN FINISH THIS STUPID REPORT ON HIS OWN.

STORMY IS OUT, PEACE!

Wait I get my blog back? Is this for real?

Yes it is true, Stormy perished there, but in doing so nearly killed the Scythean with eLeaps.

The rest of the turn boiled down to the Shepherds healing a bit more and the Carnivean casting Spiny Growth again.

Thagrosh dominated his zone for a point. 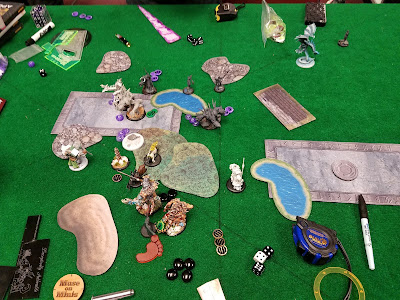 I upkept Dog Pile and thought good and hard for a second. The Scythean was practically dead, and so was the Carnivean.

I was pretty sure the pair of Bokur's could finish both of them off barring awful dice, and then the Stalker could charge in.

I did some quick math, and even with Thagrosh's aura, I should be able to kill Typhon with the Stalker if he has Primal and Forced Evolution on him, and then I could charge the Feral through the forest thanks to Dog Pile and kill off that beast too.

Fortunately, the Feral didn't Frenzy with the pair of fury left on it.

Both Bokurs charged in and killed their targets.

Kaya cast Forced Evolution and Primal on the Stalker.

The Stalker charged the Ravagore with it's claw attack and did pretty good damage.

He then proceeded to kill Typhon super dead even through excessive healing (dice +2 is a thing apparently) and used his last attack to kill the Ravagore.

The Feral moved over to block LOS to Kaya as best as I could and I passed the turn controlling his zone for a second point. 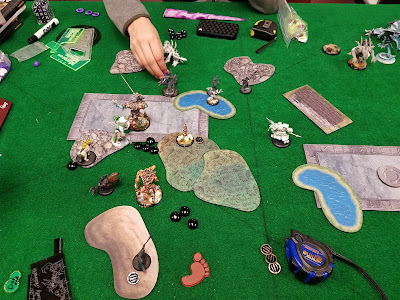 Thagrosh went in and killed the Stalker, and the Shepherds killed the Mannekin they were engaging and also contested. 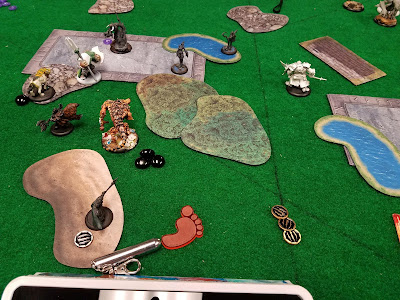 The Bokurs charged in and killed both Shepherds, and I have a terrible fear of trying assassination runs so Kaya just ran to the other zone, bringing her beasts along with her.

I went to four points and my opponent conceded. 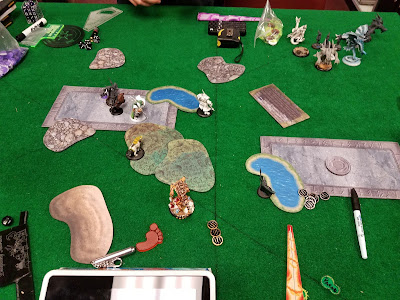 Okay color me very intrigued. Kaya is certainly a powerhouse, and Dog Pile combined with Forced Evolution is an extremely potent package.

I was laughing to myself when I realized that with Dog Pile and Hunters Mark, the Storm Raptor can charge 14 inches with a 2 inch reach past that. That's a little silly.

Forced Evolution also turns the Raptor into a very difficult to remove piece if you don't have blessed, as DEF 14 on a colossal is nothing to sneeze at. If my opponent hadn't had the Forsaken there (and I should have spent the Mannikins activations' killing it instead of farting around charging the Scythean), then the Raptor 100% survives that turn which is pretty incredible when you think about it.

I have to go console Stormy, the regeneration process isn't very kind to him and he always takes news of his dying hard. Maybe if I finish painting his armor he'll get over himself.

Thanks for reading, I hope you enjoyed it :)