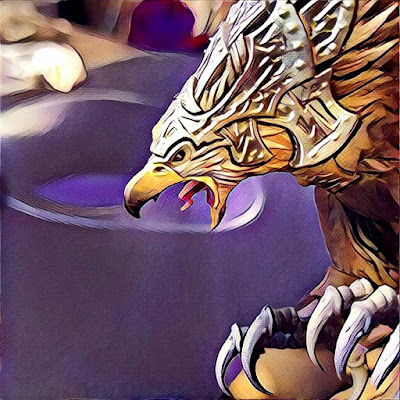 Oh man oh man oh man, this is one for the ages, The two most famous axes in all of the Iron Kingdoms (Lola and Rathrok) and the two most psychotic beat stick leaders from Warmachine and Hordes gathered to duke it out on a field of glory.

Three heavy jacks and a pair of massive, armored Dragoons supported by a small contingent of snipers stood in Kromacs way.as he traveled across the blasted wasteland. The Butcher of Khardov hefted Lola, his massive mekanikal axe over his shoulder as he stared down his hulking foe.

Few stood taller than the Butcher, but the Tharn across from him dwarfed the huge man by several heads, a sinister axe glinting in one hand.

Still, the Butcher could only see a pair of the fearsome Warpwolves flanking the Chieftain, and for those, Lola held a special desire to slay.

Then, without warning, the sun went out and darkness spread over the Butcher. His warjack's engines flared red in the sudden black, and the lesser men fell to the ground as an ear-splitting shriek accompanied the ozone crack of lightning as a massive bird swooped low over the group before stopping to hover protectively over the great Tharn King. A tail feather, longer than the Butcher was tall, drifted to the ground beside the most fearless of men, but even he felt a thrill approaching terror as the great raptor turned it's steely gaze on him.


Same table, different opponent, different faction - finally! So much Menoth to chew through.

I was pretty apprehensive about this game, Butcher 3 is a scary dude, and Khador jacks are a lot harder to kill than Menoth jacks are.

I won the roll off and opted for first, and my opponent once more took the side without the clouds and with the hill.

I deployed nearly identically to last game, but I put my Warpwolves near the close clouds so that they could run into them turn one in order to charge stuff turn 2 if necessary. 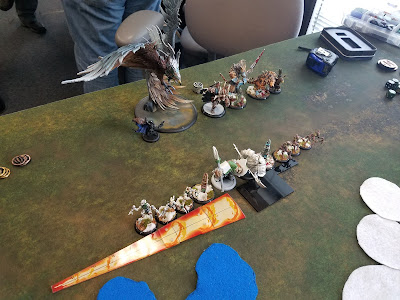 My opponent put his infantry on my left, and the Butcher and his jacks off to the right a bit, with a flanking Drakhun on each side.

Eiryss and Alten went to my right and the Marksman stayed left.

I should note here that I love this list, or variations on it. I adore Butcher 3 and this battlegroup, I love Drakhuns, and I love sniper boats. My favorite list runs Kayazy Eliminators and Widowmakers over the WGI, but I definitely think they all have a place here. 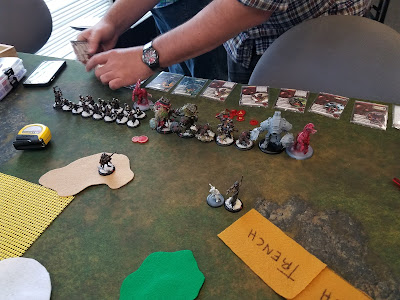 Well this is going to be interesting. I predict the game is going to go something like this:

I trade Stormy for 1.5 Jacks, and force the Butcher to come in to kill Stormy.

If I place things correctly, I should be able to kill enough WGI to make them a non issue, and then I'll have Kromac/Feral/Stalker behind Stormy to kill the Butcher if he goes in.

Stormy gets Vengeful and the Stalker gets Awakened Spirit as usual.

I make sure to toe the Feral into the far left cloud. 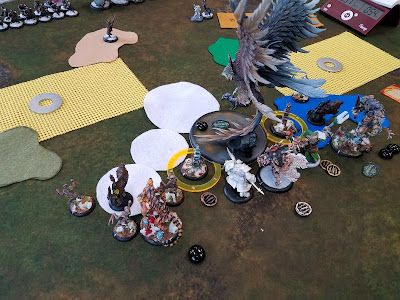 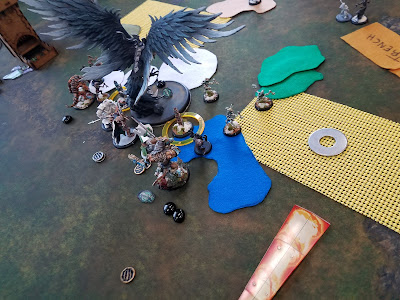 Time to get shot at!

Widowmaker Marksman and Alten shoot at the Raptor, as does Eiryss. I shield guard the Alten shot onto a Bokur, and Stormy takes six auto damage. Oof.

The Winterguard run and get tough from Joe.

The Kodiaks both trample and put down Steam, and Ruin charges Stormy.

Butcher energizers, casts Silence of Death on himself, and then his unit gets a run charge order. The dogs run up and block Butcher from going too crazy as he charges at Stormy.

The Drakhuns come in and sit there menacingly. 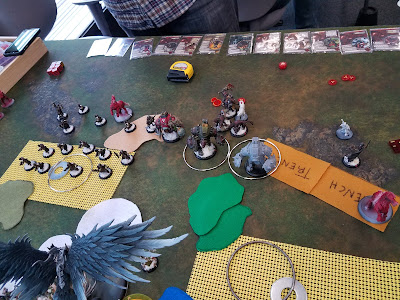 Well it's time to pull the trigger on the plan, but before I do, I want to kill as many Winter Guard as I can. If I don't kill a bunch of them, Butcher might just be able to cycle Silence of Death over to the unit and have them kill Stormy instead of forcing Butcher to commit.

I upkeep both spells and it's off to the races.

Sentry Stones put a good dent in the WGI population, and so I decide to go for it. It takes both Blackclads, but I get the Hunters Mark on the Kodiak.

Kromac moves up, casts Primal on Stormy, and pops feat.

Stormy charges the Kodiak with the claw first, and then beaks Ruin. Between all of his attacks and eLeaps, I knock both jacks down to 4-5 boxes and eLeap the Marksman to death and most of one of the Argus.

The Feral charges one of the last remaining WGI, and the Stalker moves behind Stormy and out of trample range of the unhurt Kodiak. 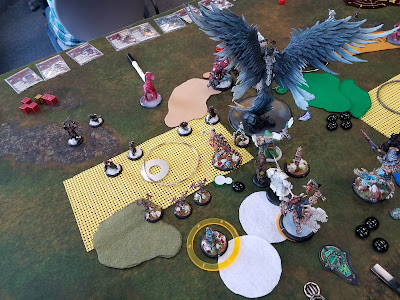 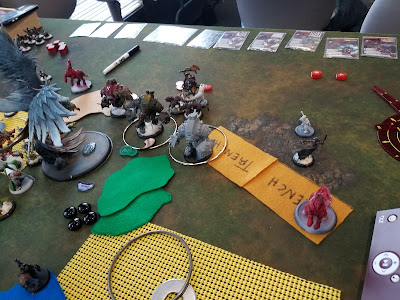 Butcher allocates one to the Grey Kodiak and upkeeps Silence of Death.

Ruin and the busted Kodiak go into Stormy and actually ding him up a bit, even with totally crippled limbs.

Butcher's unit charges, and the War Argus that was really hurt combo strikes first, killing himself. The second one combo strikes, and then Butcher starts hitting. It takes him all four attacks to kill the Storm Raptor and then he feats, casts Impending Doom, and pulls the Feral in. He buys two Flashing Blades, but whiffs one of the damage rolls, leaving the Feral at half health. He decides to camp two, and then the Drakhun goes in. At dice -6, the Drakhun doesn't quite finish the Feral off, leaving him on 6 boxes.

The Kodiak runs up to threaten Kromac, rather than going after the objective, and the other Drakhun charges the objective and then repositions around it. 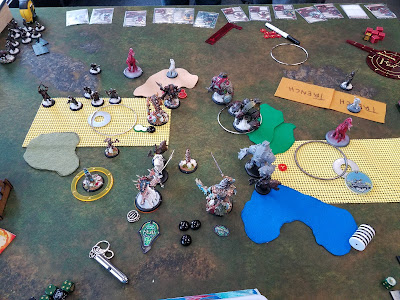 Well, I've successfully completed phase one of my plan, time for phase two.

I wasn't expecting a Feral to still be there, and that's a nice bonus, but it's really going to come down to the Stalker here.

First things first, Kromac drops everything and I spawn some Mannikins.

It's imperative I kill the War Dog, and both units go after it, but unfortunately bad dice means it's still alive.

I can't Hunters Mark Ruin, but I can try and spray Butcher with my crit KD sprays.

Neither even connects sadly.

Kromac activates and heals the Feral back to full before casting Primal on both him and the Stalker, and then casting Carnage.

The Feral activates and sacrifices movement - a very important step since the Drakhun had repositioned back so that it could counterchage - and boosts a headbutt into Butcher, knocking him over.

I buy two more attacks into him and do some damage through his camp.

The Stalker charges ruin with his claw, killing him, and then uses his second initial attack to put Butcher down. 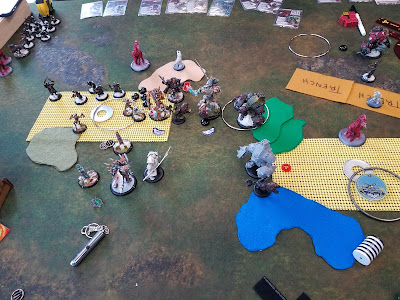 The Storm Raptor requires a completely different play approach than most gargantuans do. Since it's so fast and it can hit incredibly hard with Kromac, it's very, very, very important not to bunch your heavies up. If it can get at two of them, the game is effectively over since it *will* get the alpha strike on you with a ridiculous 14 inch threat range.

It's also surprisingly tough on Kromac's feat turn, even with softening up a bit from other models, Butcher still had to put 5 attacks into it to kill it (which is a LOT of damage).

Overall I had a plan and was able to execute it - I'm going to start calling this play "The Stormy" from now on.