In our search for reliable Una 2 tech in Menoth, my team and I (well mostly me to be honest) hit on the idea of Durant 2 with 3 Reckoners and double Idrians.

The idea is simple - tag a couple griffons a turn with Flare thanks to Durants' Field Marshal [True Sight] and blow them up with Idrians preying them.

Both I and my Menoth buddy K are sick today, and so we took the opportunity to try it out on Vassal.


We rolled up Incursion and I lost the roll. My opponent took first turn, and I chose the side with the hill for my Griffons to hover over. 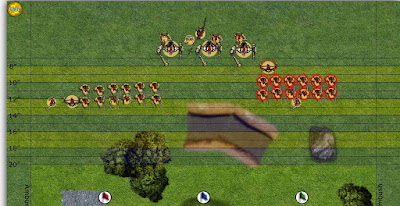 He deployed pretty central, jack fort going up the middle and Idrians on either side. He ended up preying both units of Sentry Stones. 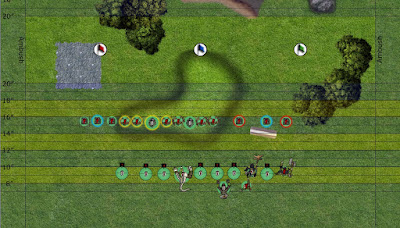 My deployment is more or less setting me up for a Scenario game here. I'm going to run Griffons over to the other side of the right hand forest to save them from guns and I'm going to pile stuff on that hill in order to make the Reckoners slightly less likely to shoot the birds with flare guns.

He runs up. Respecting the Sentry Stones' threat ranges, he parks his Idrians in semi circles just outside of the walk and spray death zone. Reckoners move up and get...Battle, cuz I literally have nothing to shoot them with that isn't magical and Hunters Mark isn't in play yet.

Durant moves up and casts Inviolable Resolve on the central Reckoner. 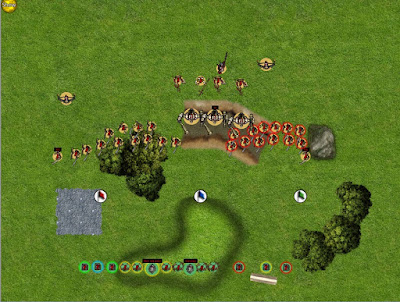 I really can't afford to sacrifice my Sentry Stones so early, so they all back up outside of the 17 inch threat of the Reckoners' walk and shoot.

I run Griffons up, keeping them more than 12 inches from the Reckoners and on the hill so that K can't aim and shoot.

Hand of Fate goes on one Sentry unit, and Mirage goes on a Griffon because I messed up my deployment. I normally want it on the Pureblood.

Griffons run to behind the forest on the right and farther than 11 inches from the Idrians on the left (6 inch walk plus 5 inch shoot under stealth).

The theory becomes practice as the first Reckoner moves up and Flares a Griffon, doing 18 damage in the process.

The other two Reckoners miss their boosted 12s, so only 1 Griffon and a bunch of Mannikins die. 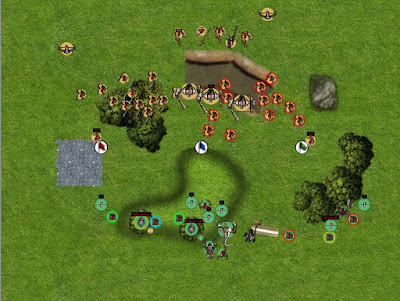 Spells are upkept, and Mannikins are placed. A bird is Apparitioned up from the right.

I can get a charge on each jack, and two on the right hand pair.

My opponent has also contested rather lightly on all flags, if you consider Shifting Sands Stanced Punch Monks light.

The Sentry Unit with Hand of Fate slaughters a few Idrians.

Una goes, Feats, casts Primal on a Griffon and Hand of Fate on another. She takes an aimed shot at the right hand Punch Monk, doing lethal but K rolls tough.

Gorax activates and Primals up a second one.

I run a pair of Griffons to engage all three heavies.

Griffons go in, murdering the left Reckoner and leaving the right on 3 boxes.

The Blackclad moves up and sprays down the line of the Punch Monk and a few more Idrians. He connects with the Punch Monk (!!!!!) and my opponent fails his tough check. He also kills the other Idrian that is contesting.

The last Sentry Unit kills the final Idrian contesting the middle, and I cap the mid flag with a Griffon.

Shifting Stones on the left contest the flag.

I make a wall of bodies in front of Una and score two points. 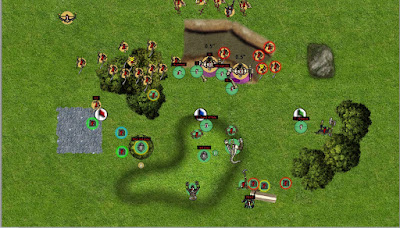 Durant feats after healing the right Reckoner for a couple.

The mid Reckoner moves back, taking minimal damage from free strikes, and Flares the second from the left Griffon.

The Punch Monk charges and one-shots the left Sentry Stone.

The right Idrians move up and shoot at the Blackclad, missing, and the Sentry Stone, for superficial damage and contesting. 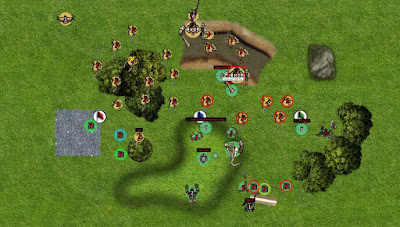 The one Griffon frenzies from Primal, and it's off to the races with both spells upkept.

Blackclad Sprays plus Sentry Stone sprays clear off most of the right hand flags.

The right side Griffon charges the nearly dead Reckoner and kills it.

Two Griffons go into the still healthy Reckoner and I hit a grand total of twice or three times for nearly no damage at all.

Una aims and shoots the last remaining Idrians contesting down, and I cap both flags with the Wilder and Gorax.

Pureblood moves up and puts a dent in the Idrian population on the left.

I go to four points and my opponent concedes. 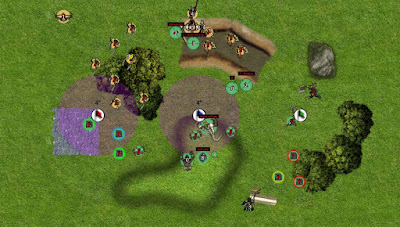 Score 4-0
Victory for the Druids!

The more I play Una, the more I realize that she has the complete package - Scenario, Attrition, and Assassination all rolled up into one. The only tricky parts in playing her are basically this - which win condition is the right one? How do I keep her alive?

If you can answer both of those questions, I feel like she is golden outside of certain extreme gunline skews (Sloan, Issyria, maybe Caine 2) or armies that can do a lot of damage indirectly through eLeaps or magic attacks and sprays.

This particular matchup comes down to terrain. If you can boost the Griffons DEF even higher against the Reckoner shots, the math gets really bad, and quickly.