The three undefeated players after round 2 were myself, my friend, and a Canadian gentleman playing Ret.

The Ret player got the pair-down, so I found myself looking at Reznik 2 and Amon Ad-Raza, which was a list that my friend had specifically brought to handle me.

..... Oh you want the real list? Okay hold on I gotta look all the Menoth jacks' names up.


I dropped Una. Reznik and Amon are both TERRIBLE matchups for Wurmwood.

We were playing Incursion and I won the roll off and went first. 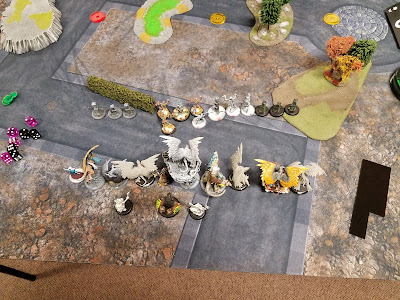 So my game plan for this game was basically to kill off Nicia, and then send a Griffon over to hang out on the right flag and just use that to win the game while we fought in the middle. I could also send the Gobber Chef if I needed the Griffon.

With that in mind, everything basically just ran. The Pureblood got Mirage and the Sentry Stones got Hand of Fate again. 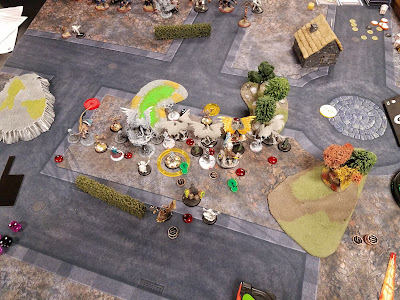 My opponent advanced his Punch Monks into Shifting Sands Stance.

His army ran up so that it was 13 inches away from my front line and got immunity to spells from the Choir.

Amon cast Synergy and Fortify and advanced to behind the wall.

I did some premeasuring and realized I could get 4 Hand of Fate Sentry Stone sprays on him AND an assault from the Pureblood. (Him here is Amon).

Sentry Stone Mannikins need 12s to hit a 16, but with Hand of Fate that's actually slightly better than a coin flip for me. At dice off 4, a boosted Hand of Fate POW 10 spray does 8.5 damage, or 3.5 after Focus negation. Call it 3 for easy sake.

If I don't get to boost the second damage roll, it's going to to do 5 on average, or 0 after Focus negation.

After the first Mannikin unit, Amon should be on 0 camp with 3 damage on him.

The second unit should then go in and do 8.5 and 5, for a total of 14.5 damage before the Pureblood goes in. If I spike a little high, he's dead there.

The Pureblood needs a boosted 11 to hit ( a coin flip ) and is straight dice.

Well, I decide to go for it. If it works, I win. If it doesn't, he gets my Pureblood and has 2 coin flips to kill my Sentry Stones with Reckoner shots, but then Amon is probably pretty banged up and has to play super scared.

The Mannikins all spray and whiff their damage rolls pretty hard, leaving him on ten health.

I'm already pretty committed, so I clear out the pathway for the Pureblood who assaults in, gets the 11 to hit exactly and then rolls 10 for damage, killing Amon. 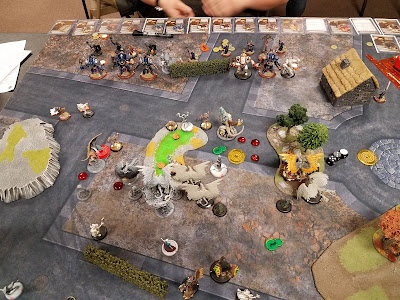 That was really cheeky of me, but I really didn't want to spend the mental energy playing against this list if there was going to be a round four, so I went for it.

Turns out, the Ret player had terrible dice and lost to the minions player I'd played the previous round, so this game was the finals and I won the whole event!

Overall I had a great time, the venue was nice, the PG was excellent, and my opponents were all good sports and nice to work with.

Of course...then we found out after driving 2 hours back that the pass was closed, so we ended up going on a massive drive around the entire mountain range to get back to the Dry Side of the state over the next day and a half, but hey, that was fun too!