I've been playing against this particular opponent a lot on VASSAL since neither of us have a super active local meta and driving to Spokane for casual games gets expensive and time consuming really fast.

We had actually tried this matchup out the previous evening, and I knew it was going to be interesting.

Man O'War Drakhuns are a nightmare for Circle. They're fast, accurate, hit like a train, and are insanely hard to kill. I've had to commit heavies in the past, nothing else has cut it.


I played my Wurmwood list. His other list was Vlad 2 which seems like a bad time into Wurmwood and I didn't think Tannith had the ability to deal with Butcher himself.


We were playing entrenched. I won the roll off and chose to go second since I wanted the side with the forest to make my wall of things. We both had Fuel Cache as our objectives, and with the clouds in the middle of the table, I felt like this table edge was better. In hindsight, in a Scenario this dead, going first probably would have been the better choice.


He skewed deployment left with only Ruin, Widowmakers, and a Drakhun on the right.

I counter deployed by putting the Brigands across from the Kodiak I wanted them to prey on and the Shamblers near the water. 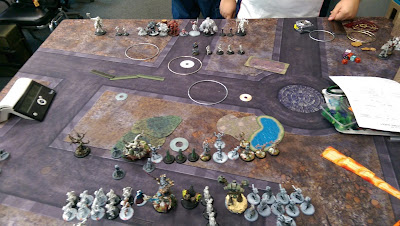 I'd screwed up my AD, measuring just from my edge and not from his models, so his Widowmakers were able to kill all of one unit of Sentry Stones' Mannikins. Ruin ran up, the Drakhuns flanked hard. His battlegroup moved up. Pretty typical turn 1. 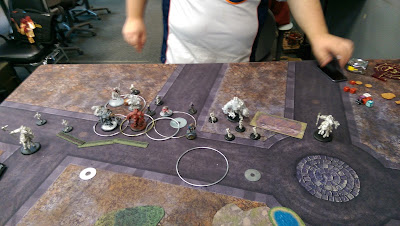 I premeasured it out and thought I could kill his entire unit of Widowmakers and the marksman AND a Kayazy this turn.

Cassius ran up, Wurmwood activated, boosted out a Hellmouth and murdered all but one Widowmaker. He then cast Dark Path to pull Cassius back. A Mannikin murdered the other Widowmaker, and I ran the Shamblers up.

Bone Grinders murdered each-other so that Wurmwood would have souls and the Bokur would have corpses.

Brigands advanced to outside of the Drakhuns charging threat, and my heavies stayed central. 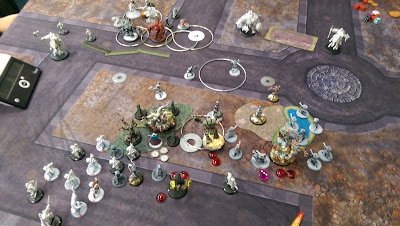 My opponent committed Ruin to killing my Sentry Stones and just barely didn't kill the second one. His Kodiaks trampled up and vented steam. Eliminators on the left got in my face. 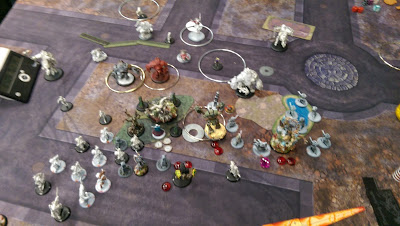 I screwed up a lot this turn.

The Bokur and Shamblers charged Ruin and the Drakhun, and with five bought and boosted attacks Ruin was down to 20 boxes.

Now I start screwing up.

What I should have done is cast Hunters Mark on the Drakhun out on the right, charged the Stalker in, murdered it, sprinted back to control the flag, and then have Wurmwood feat to protect my advantage.

Instead I cast Hunters Mark on the red Kodiak and put Primal on the Stalker, who charges in and just barely squeaks out the kill (I rolled garbage for my first three rolls and needed an unboosted nine at the end, which I got). I then activated Wurmwood, intending to put Curse of Shadows on the grey Kodiak so that my Brigands could murder it, and instead I got Stranglehold happy, killing off both the of the left Eliminators.

Now I've got both heavies too far up the table, no way to get points this turn, no way to feat and get anything meaningful done with the Brigands, and no plan. I should have feated and gotten Wurmwood out of there, but I decided not to.

Brigands move up and do 12 damage to the grey Kodiak, perfectly average. They reposition back. 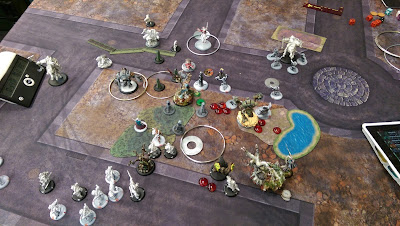 My opponent doesn't hesitate. Butcher charges in and yanks Megalith towards him, killing him with his feat. He couldn't quite get the Stalker thanks to placement of other things.

The Drakhun charges and kills Lanyssa, and then repositions into my Brigands. The other Drakhun kills some Shamblers.

The Stalker frenzied and killed a War Argus.

I got incredibly tunnel visioned there, leaving Wurmwood with hardly any Fury left to play with. I had to take a good 15 seconds to calm down at this point since I had felt that my dice were consistently poor both games and the first game had really rattled my calm. I hardly ever go on tilt, but I almost did here.

The Bokur activated once I'd gotten myself under control and made Butcher Stationary.

I charge the Drakhun with some Brigands, and do 9 damage. 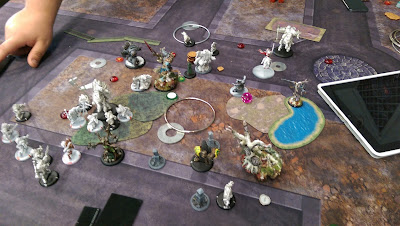 Butcher can't Vengeance because shaking stationary happens in control phase and Vengeance happens in Maintenance. He does shake though.

My opponent can't charge Cassius with Alexia because he's 3.1 inches away, so she advances and misses the 8 she needs. She crafts a thrall warrior who also misses. The Drakhun can't get to Cassius either.

My opponent messes up his Ragman placement and Butcher can't benefit from Death Field. He still murders the Stalker though.

The Drakhun on the left kills a couple of Brigands, giving Wurmwood some souls. 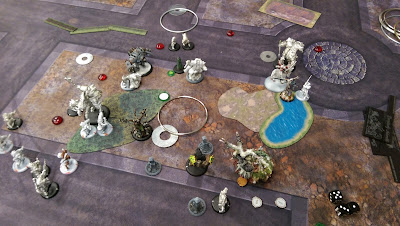 Butcher is only camping one, and so I cobble together a plan. Wurmwood will cast Curse of Shadows on Butcher, Hellmouth him closer and then Primal the Gorax. The Shifting Stones will port backwards so the Gorax has a throw target and he will toss Butcher at it. I can then charge 3 Brigands after getting 4 shots with Hog Wild.

I go for it, putting decent damage on Butcher between Hellmouth and the throw damage.

The Brigands charge in and put him down.

Victory (somehow!) for the Druids! 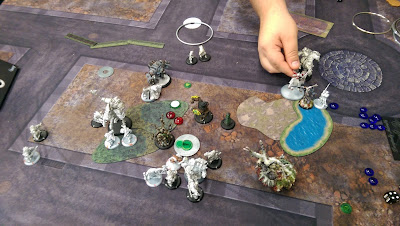 That was a super strange, incredibly jank assassination run. I think this is a really hard matchup for both players, and I need to learn to use Wurmwood's feat better and settle for incremental advantages rather than going for massive alpha strikes, especially against a caster like the Butcher.

Well played game by my opponent, I'm going to remember this one for a long time.