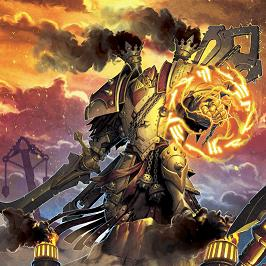 High Executioner Servath Reznik - a name only slightly less heavy metal than his second form, Servath Reznik, Wrath of Ages - is one of my more favorite Protectorate Warcasters. He's just a total boss running around with a giant sword and slaughtering the heretics. Simple, clean, easy to understand.

As I've mentioned before, my immediately local meta is very new, and I'm running a journeyman league right now that has generated a fair bit of excitement for the game. Six players is a big improvement over none, and I've been ecstatic to see them get better and better at the game.

One of the guys has been venturing into the 75 point game realm ahead of schedule, and we got in three highly enjoyable games. He is practicing 75 points with the hopes of ironing out where his JML list will ultimately end up, and he's grown unhappy with the options his battlebox caster gives him. Tonight, he dropped the Executioner into me for practice, two games of which I took pictures for.

We rolled for which of the 8 casters I had with me would get thrown down, and it landed on Tanith.

I've got a list for Tanith to practice for the upcoming i5 event already anyway, so I put that down without much hesitation. It's also only 7 points off from where my JML list will end up, and that was a nice perk. The JML version will have Tanith's Scarsfell be an Argus instead, and possibly play a Blackclad over Lanyssa.


I had him look through the Steamroller Packet and pick a Scenario, and he opted for Recon, which is one of, if not actually, my favorite of the Scenarios.

I won the roll off and opted for first. I'm not playing Haley 2 or Wurmwood, and so my game plan isn't quite as tied to Scenario. I also really want to get up the field with this list as the threat projection it brings is really quite remarkable.

We talked about deployment after this picture was taken, agreeing that it would have been better to have his Errants in the middle as the flags aren't controllable (which he hadn't realized). I offered to let him re-deploy, but he wanted to see how it played out, an attitude which I applaud. 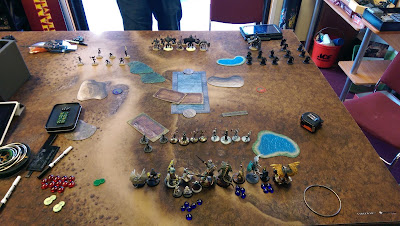 My Fuel Cache made a cloud to the left since apparently Errants no longer have hunter, and he didn't have any other appreciable shooting to try and hide from.

Each Sentry Stone got a couple fury and popped up. Tanith put Scything Touch on the Stalker and Admonition on the Pureblood, and then charged up. 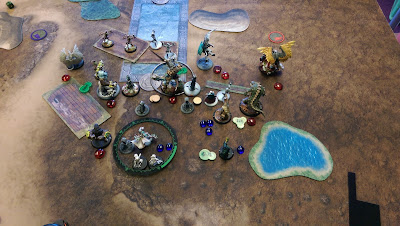 His Daughters run and jam my Mannikins, which is absolutely the right play there. Jamming Mannikins is a much better strategy than killing them, unless you can kill all three. Even then, it might be better to just engage them and force them to attack in melee. Unfortunately, he didn't quite have the distance to engage the third one.

His Errants ran at me after Reznik put Ignite on them, and the Avatar popped Gaze of Menoth and ran, catching the Golden Scarsfell.

His two other heavies ran 10, which we found out a turn later is illegal since they're only speed four (whoops!), and his lights also came up on the side, creating "Fort Reznik". The choir ran up behind. 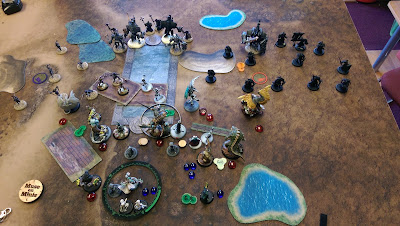 Tanith and Una both upkept spells. I was able to aim with one Mannikin on the left, and I rolled two more fury onto the Sentry. Between the aimed spray, one Mannikin freeing the other one up, and another boosted Spray, four of the Daughters died.

The Grey Scarsfell walked up and threw the other Daughter camping on the flag into Nicia, killing the Daughter and Knocking Nicia down. He then cast Dodge on himself.

On the right, Mannikins sprayed down Errants. I think my opponent used self-sacrifice a few too many times, letting me keep attacking on model and killing more than I would have been able to otherwise. I think using self-sac well is probably one of the most difficult, situational things to learn in Menoth.

The Blue Griffon walked up and failed to throw the Revenger (arc node?) backwards, so he just cast Dodge and sat there. The Stalker warped Prowl again, walked up, killed the one remaining Errant, and cast Lightning Strike to get back into the cloud. The Yellow Griffon cast Dodge and moved up.

Snapjaw got around the wall and cast Submerge, and then Wrong Eye moved up and cast both Submerge and Star Crossed.

Lanyssa, who wouldn't be doing much this game since Reznik has Witch Hunter, cast Ice Bolt at an Errant and killed it.

The Pureblood moved up and sprayed the now knocked down Nicia to death.

Tanith moved up and dropped some fury, as did Una. 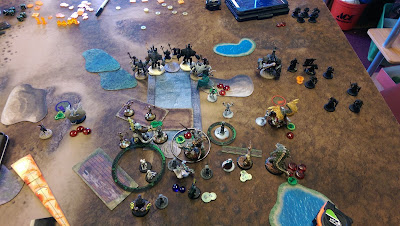 My opponent went into the tank for a bit, and then used the Avatar (rolled four focus every turn with that guy) to move over out of Star Crossed and kill the Blue Griffon.

The lone Daughter ran behind the Pureblood, who triggered Admonition and moved away, just over 8 inches from his Crusader. I'd forgotten to choose his warp the turn earlier, so I defaulted to Strength as the most fair of them. (The Pureblood's facing is exactly opposite of how it looks in the pic, the tail just couldn't fit in with correct facing.)

Errants swarmed the Golden Griffon, ringing it with dudes so it couldn't dodge. He actually connected with a Star Crossed 8 and did 14 points of damage to it, rolling a crit as well and lighting him on fire thanks to Ignite.

His heavies came in, daring my Stalker to go for them with the Avatar so close behind. The flamethrower light jack moved up and tried to kill the Sentry Stone, but didn't quite do it. 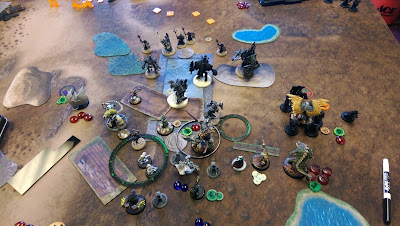 I saw an Assassination run at the beginning of my turn, but wasn't sure how I liked my odds. It involved a Griffon throwing a light with a higher Strength than himself, and that hadn't worked the turn before. Since it only really involved two models and Tanith's spells, I decided to play out the rest of the turn and come back to it.

I started things off with Snapjaw charging in and taking a massive free-strike, also getting lit on fire thanks to a crit and Ignite, and then killing three Errants. Wrong Eye cast both Star Crossed and Submerge again.

Una moved up, healed the Golden Griffon for a bit, and then shot one more Errant off of her beast.

The Griffon activated and murdered the last two Errants.

My Stalker moved in and killed the Revenger, using the objective as a backdrop to keep from getting pushed away (man Repel is a good rule), and then Sprinted back to the Stones, who teleported him over behind the wall.

The Grey Griffon moved up and threw the Flamethrower jack into Reznik.

I measured the Pureblood's charge lane twice or three times to ensure he wouldn't take free strikes. The painted Sentry unit activated and moved out of the way. Tanith used her Feat, casting Scything Touch and Primal on the Pureblood.

The Gobbers grew a cloud in front of Tanith in case the Pureblood flubbed up.

The Pureblood assaulted in at essentially PS 20, and at dice +3 put Reznik down through a couple of focus. 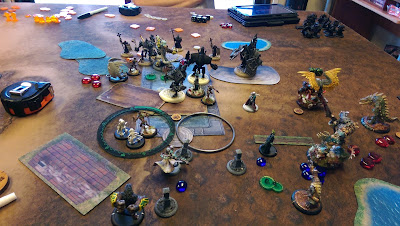 The more I play this list, the more I love it. There are so many angles of attack every game, whether from fast, hard hitting lights, or tons of power attacks, and it's so hard to keep it contained.

Star Crossed with DEF 14 and 15 beasts is really excellent, I undervalued it for the first few months of mark 3, but now that I'm playing with it more, I'm really understanding how good it can be with proper positioning.

My opponent played a really solid game too, I'm very proud of the progress he's made in the last couple of weeks as he's been getting more games in. Had this Assassination run not gone as planned, I would have had to sacrifice the Pureblood to kill one of his heavies, leaving 2 more for the Stalker to clean up. That's not a position I like to be in. Next game, he sees an Assassination angle that I don't and things get interesting....*cue dramatic music*