Battle Report 106: Baldur 2 (Bones of Orboros) vs. Harkevich (Jaws of the Wolf)

Game two, I was playing against Khador, and my opponent was pairing Butcher 3 with Harkevich. I think my Wurmwood list is quite okay into Butcher 3, and my opponent thought so too, but Wurmwood, at least my build, doesn't stand a chance into Harkevich's legion of jacks.

With that in mind, I put Baldur 2 down.


We were on the same table, and I lost the roll off again. I took the side with the wall and the house, thinking to save at least one Woldwrath from getting charged. If I can prevent him from getting more than 1-2 heavies into me at a time, I might be able to heal up enough to keep all of my beasts alive through the game.

Also important note, Baldur is going to be a key beat stick late game, and I'm going to need him to take down damage jacks, so I was almost never going to get to ritual of purification the Wurm tokens off. 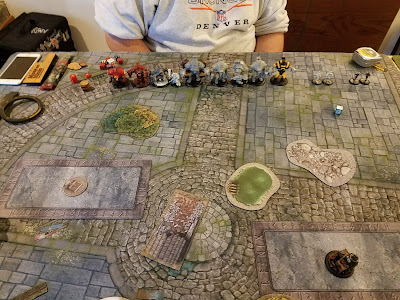 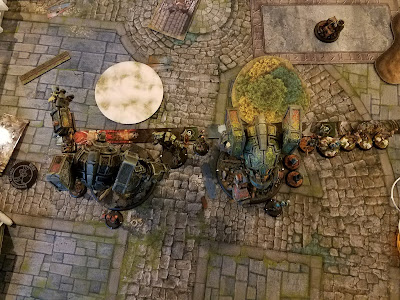 Harkevich does what he does, casting Mobility and charging forward.

His 'jacks all run up the field, and the Eliminators and Forge Seers run as well. 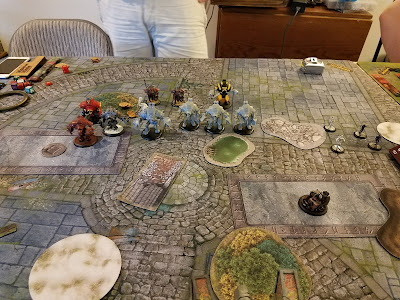 In kind, I run everything up as well, keeping the right hand Woldwrath out of the Marauders charge ranges. I put a Rock Wall down between the building and the other wall so that the Juggernaut can't charge the Woldwrath.

Roots of the Earth up on both the Woldwraths in case I missed something. 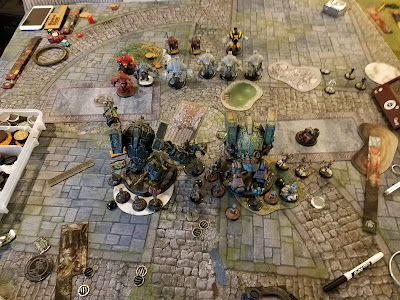 I get jammed with Kodiaks. Harkevich pops Mobility and feats. 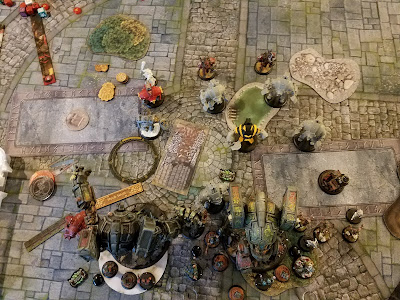 Two priorities this turn - get Roots of the Earth everywhere (feat probably), bash up a couple jacks, and contest his zone.

I port up a Shifting Stone to accomplish the last one. Megalith plus the right hand Woldwrath kill off their Kodiak, and the left Woldwrath beats on the other.

Stoneshapers each pull a fury so Baldur can transfer.

I unsuccessfully flail at Kayazy with Mannikins.

Baldur moves up, casts Rock Wall to prevent the right hand Wrath from getting all the Marauders in his face and Feats, taking a couple damage from Wurm tokens. 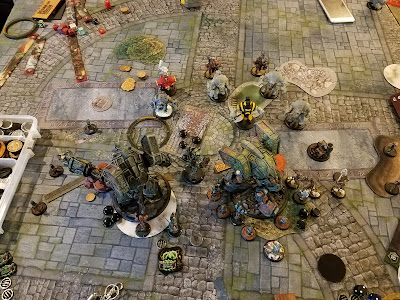 My opponent wails on Megs, but fluffs the hit roll a couple times thanks to the wall bonus.

He sends two Marauders into the objective and leaves it on one box (yesss).

The other Marauder flails at the Wrath, but at dice -7 isn't doing much.

He kills the contesting stone with a Juggy and goes to one. 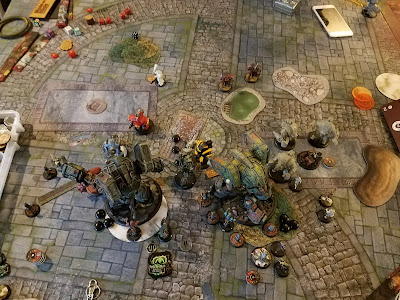 I pull as much Fury as possible with Stones and Baldur.

I kill off the left Kodiak with Baldur, but I crucially forget to Roots the right hand Wrath. Baldur does put it on himself though.

I contest with another Shifting Stone. 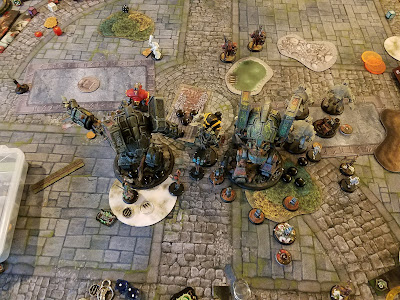 Not casting Roots of the Earth costs me here, as my Woldwrath goes down. It takes all three Marauders AND a lucky dice break on the part of the all crippled Juggy.

His Kayazy kill the objective and he scores 2 points here. 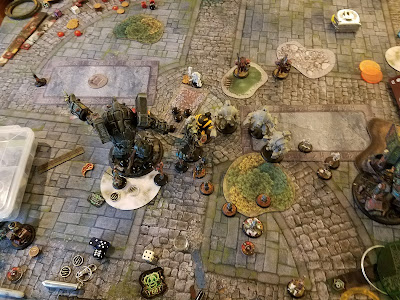 Megalith kills the Juggy and nearly kills a Marauder before putting Roots of the Earth on himself.

I contest the zone with a few Shifting Stones and a Mannikin or two.

The left Juggy nearly dies to the Woldwrath, and Baldur moves up.

I port both Shifting Stones closer to the middle of the table. 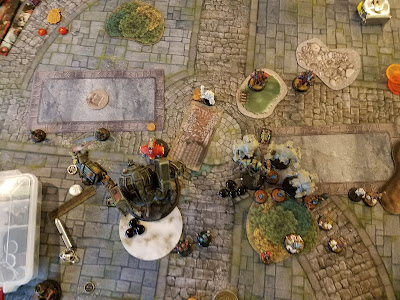 Harkevich runs to the zone. 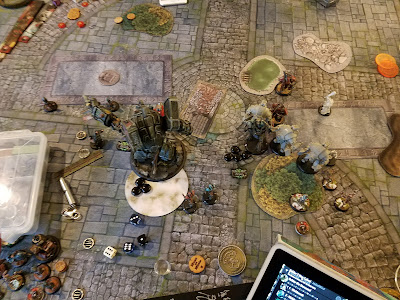 Megalith goes first, leaving yet another Marauder on life support and killing the other.

The Juggy dies to the Woldwrath initials.

I move both Shifting Stones over again, just touching the edge of the zone, and contest with everything I have left that can. 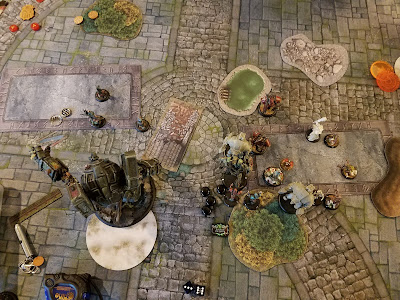 Megalith finally dies, as do all of my other non-Woldwrath models on that side of the table.

My opponent does a happy dance, and then I point out that I also get 2 points.

He's blocked my Wrath out of the zone pretty hard. 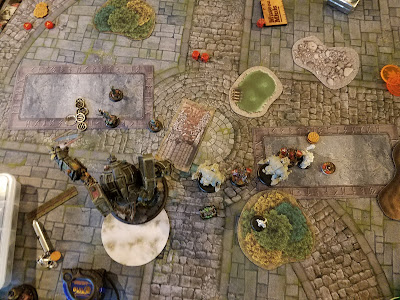 Fortunately for me, my Shifting Stone is less than 8 inches from the edge of his zone, and is able to port over and contest.

My Woldwrath chucks his Marauder into his other Marauder for fun, and I score two points. 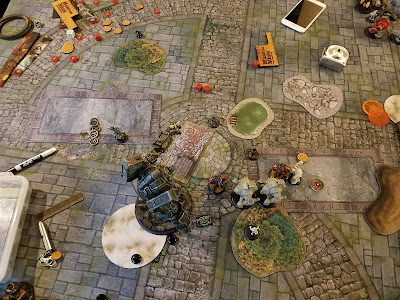 Wow this is a hard matchup. Terrain really saved me here, as did my opponents dice when he went after the objective.

I made a couple big mistakes (ALWAYS put Roots of the Earth up, it's better than making that last attack Megalith), and this is just....such a hard game. This Harkevich build is no joke, and I need a lot more practice into it.